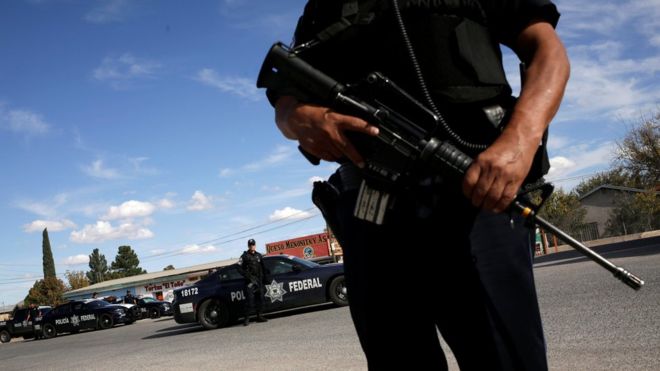 The move would enable a wider scope of US action. Mr Trump also said he had told Mexico the US was ready to “go in and clear out” the cartels.

In response Mexico’s foreign minister said his country would not allow any “violation of national sovereignty”.

Earlier this month Mr Trump vowed to “wage war on the drug cartels” after a deadly attack on US citizens in Mexico.

The victims – three women and six children who were Mormons of dual US-Mexican nationality – were killed in an ambush while travelling through a remote area of northern Mexico on 4 November.

Officials said it may have been a case of mistaken identity, but relatives of the victims said the killers must have known whom they were targeting.

What did Trump say?

Conservative media figure Bill O’Reilly asked President Trump on Tuesday whether he was going to designate the cartels as terror groups and “start hitting them with drones”.

The president said: “They will be designated… I have been working on that for the last 90 days. You know, designation is not that easy, you have to go through a process, and we are well into that process.”

He added that he had told Mexican President Andrés Manuel López Obrador that the US was willing to launch operations against the cartels inside Mexico.

“I’ve already offered him to let us go in and clean it out and he so far has rejected the offer but at some point something has to be done,” Mr Trump said.

What would the designation mean?

When a group is designated as a terrorist organisation in the US, it becomes illegal for people in the US to to knowingly offer support.

Its members are also banned from entering the US. If they are already in the US, they face being deported.

If financial institutions discover they have funds connected to the group, they are required to block the money and alert the US Treasury Department.

How has Mexico responded?

Foreign Minister Marcelo Ebrard said Mexico had made clear to the US its rejection of any violation of its sovereignty. He also said Mexico was committed to tackling transnational organised crime.

“Mutual respect is the basis for cooperation,” Mr Ebrard said.

A foreign ministry statement said Mr Ebrard would discuss the issue with US Secretary of State Mike Pompeo.

Mexico wants measures to reduce the flow of weapons and money from the US to the cartels as well as efforts to stop the movement of drugs across its territory towards the US, the statement said.

On Monday Mr López Obrador told journalists Mexico would not accept foreign intervention against the cartels.

“Our problems will be solved by Mexicans. We don’t want any interference from any foreign country,” he said.