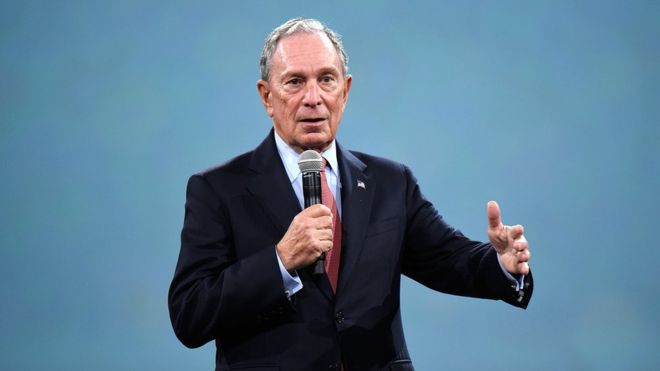 The ex-New York City mayor is concerned the current field of candidates is not good enough to beat Donald Trump in the 2020 election, his adviser says.

The 77-year-old is expected to file paperwork this week for the Democratic presidential primary in Alabama.

A total of 17 Democratic candidates are vying to take on President Trump.

Some recent opinion polls have suggested that Ms Warren and Mr Sanders – who are regarded as to the left of Mr Biden – might lose against Republican Mr Trump if either won the party’s nomination.

So far, three Republicans have said they will challenge Mr Trump in the party’s primary contest.

But it is seen as almost impossible that anyone will take the Republican mantle from the president.

What did Bloomberg’s adviser say?

In a statement, Howard Wolfson said: “We now need to finish the job and ensure that Trump is defeated.

“But Mike is increasingly concerned that the current field of candidates is not well positioned to do that.

“Based on his record of accomplishment, leadership and his ability to bring people together to drive change, Mike would be able to take the fight to Trump and win,” Mr Wolfson said.

President Trump, 73, has so far made no public comments on the issue.

In Alabama, candidates must by Friday submit the necessary paperwork to get on the Democratic primary ballot, and reports in US media say Mr Bloomberg has chosen the state because of its early filing deadline.

The Democratic nominee for the presidential election on 3 November 2020 will be selected after a series of electoral contests across the country.