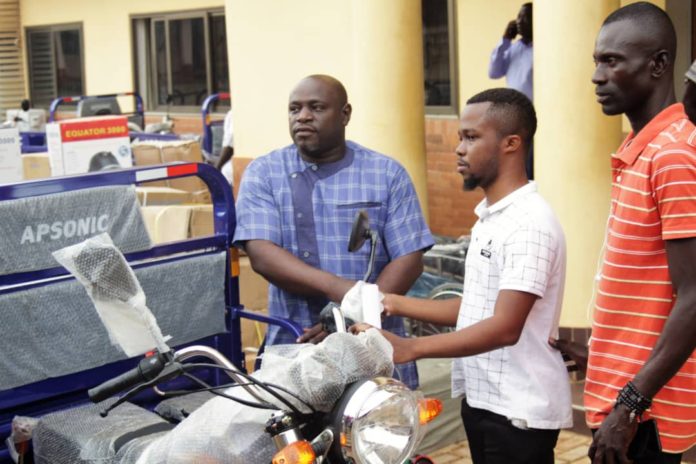 One hundred and five (105) Persons living with Disability (PWDs) in the Denkyembuor District of the Eastern Region have benefited from varied economic empowerment interventions.

The beneficiaries were provided items such as container shops, tricycles, refrigerators, fufu pounding machines, Hairdryers, sewing machines among others. Also, cheques were issued to pay school fees and medical bills of other beneficiaries.

Seed capitals were also provided to the beneficiaries to stock the containers and start a business with alacrity.

The Ghc180,000 worth of items was procured through the Disability Fund of the Denkyembuor District Assembly to provide sustainable sources of livelihoods.

The District Chief Executive for Denkyembuor, Seth Ofosu Birikorang said, it was the fourth batch of beneficiaries since he assumed office, adding, a total of Ghc500,000 has been released from the fund to procure various livelihood empowerment equipment for persons with disability in the district.

“We’ve realized that when you give them money, they just misuse the money so rather empower them by providing provision stores for them. Some were provided motorking, deep freezers all with seed money to enable them to do business.”

He added, “it will interest you to note that there are some persons with disability who are very good in Farming so what we do is that we buy items under the planting for food and jobs-fertilizer, seedlings and we also help them to plough their farms”.

The DCE assured that, the Assembly will judiciously manage the Disability fund to their benefit.

The leader of the PWDs in the district, Osei Bonsu, said about 1000 people with disabilities have so far been captured in the district. He, therefore, appealed to those yet to receive items requested to have patience.

The Member of Parliament for Akwatia, Mercy Ama Gyamfi, advised the beneficiaries to take advantage of the items received to turn around their lives.