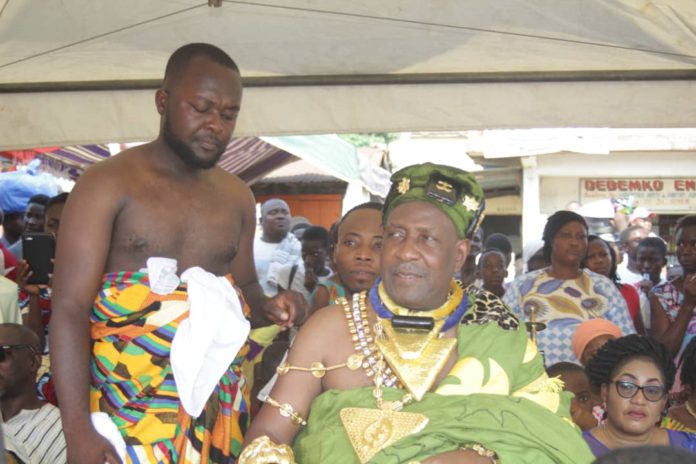 The Benkumhene of Suhum Traditional Area, Nana Opaebere Awuah Asiedu I, has expressed concerns over the refusal of President Akufo-Addo to appoint the member of  Parliament for the area Fredrick Opare Ansah as a minister.

“I don’t know why Suhum has many towns and villages but our MP doesn’t have any Ministerial appointment. All these things dampens us”.

Constituents of Suhum including chiefs are believed to hold resentments about the perceived sidelining of their lawmaker from Government and the embarrassing attempt made in 2017 to strip him off his membership as part of Ghana’s delegation to ECOWAS Parliament.

They averred, development has stifled in the area due to the perception that their MP is an  ardent loyalist of then rival of President Akufo-Addo, Alan Kyeremanteng.

Nana Opaebere Awuah Asiedu I, bemoaned “Suhum is not getting anything out of the National cake.We cannot say nothing but comparatively our contribution to the economy is so big-cocoa, Cassava. We feed Accra like there is no tomorrow .So we are asking that, come next year,the government should look towards us and do something meaningful and better”.

He singled out the deplorable state of the Suhum government Hospital as evidence of government neglect.

“The hospital is very shady. It is very deplorable,it is a shame! .come next year i am going to give them standby Generator.I will also adobt the Children’s ward. Close to 600 towns and villages and this is the only hospital we have we don’t have trauma center, people are dying ”

He stated that chiefs in the area are striving to improve the living conditions of their subjects but are financially challenged therefore government that collect taxes from the people must not look on unconcerned for the people to be impoverished .

“We are doing our little bit. For instance when i became a chief, i had to regravel this road,for 15 years no car could go to the market so we are doing our best but government must come to our aid and do something better.We want to do more but we don’t have bigger pocket like the government”.