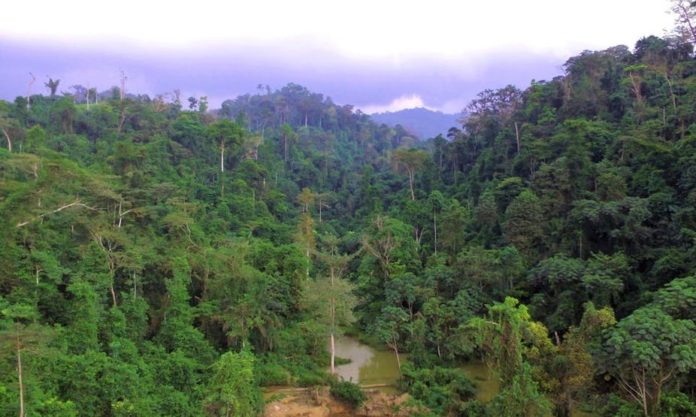 A Rocha Ghana, a non-governmental organisation on environmental protection, in a joint effort with twenty (20) civil society groups, has sued government over mining bauxite at Atewa Forest.

A charge sheet sighted by starrfm.com.gh showed notice of civil action filed by the group against the government of Ghana with the Attorney General and Minister of Justice, Gloria Akuffo, over the plans to “exploit the Atewa Range Forest for bauxite”.

The notice, filed on Monday, 13 January 2020, “is in pursuant to Section 10 of the State Proceeding Act 1998, Act 555. The action intends to protect and safeguard the environment pursuant to the constitutional duty imposed on us under article 41(k) of the Constitution of Ghana, 1992,” the group said.

It said EcoCare Ghana, Ghana Youth Environment Movement, Save the Frogs Ghana, and several other institutions have affirmed their support to ensure that governments, both now and in the future, respect the right of Ghanaians to a safe and healthy environment.

“We, being good citizens, support government’s quest to develop Ghana and, as part of such efforts, to raise funds through various endeavours including exploiting the country’s resources. However, it is the case that Ghana does not need to exploit the Atewa Forest bauxite reserves since there are far richer bauxite reserves, according to information available to the government and to the entire Ghanaian populace.

“Also, considering the critical importance of the Atewa Forest Range to Ghana’s water supply system, biodiversity and natural climate change adaptation, it would be best not to exploit the Atewa Range Forest”, the group asserted.

It said the notice has been served, bearing in mind several constitutional actions to draw the government’s attention to the fact that mining in the Atewa Forest would be “very detrimental”. 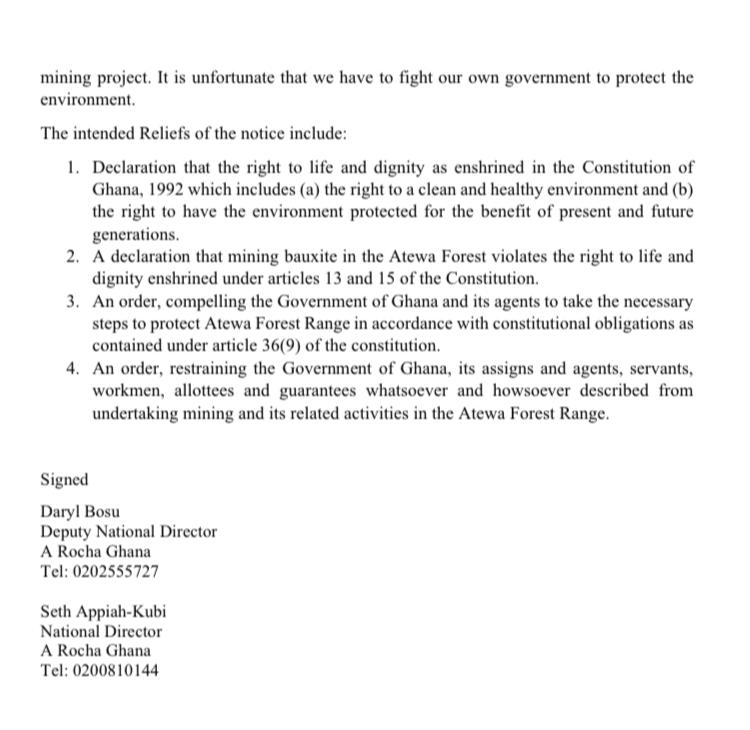 “We, together with over 20 civil society organisations (CSOs), both local and international, have embarked on a series of campaigns to steer the government away from its decision. In the same spirit of environmental protection, we have sent a petition to both the Presidency and Parliament but the government of Ghana consistently demonstrates no interest at all in these actions. It is against this background that we serve the notice to bring a legal suit against the government of Ghana should they fail to exclude Atewa Range Forest from the bauxite mining project. It is unfortunate that we have to fight our own government to protect the environment”, A Rocha Ghana bemoaned.

The intended reliefs of the notice include:

In November 2019, Hollywood star Leonardo DiCaprio, who is also an environmentalist dedicated to the protection and wellbeing of all earth’s inhabitants, kicked against President Nana Addo Dankwa Akufo-Addo’s government’s plan to mine bauxite in the Atewa forest in Ghana’s Eastern Region.

The actor, who played a lead role in the movie ‘Titanic’, said the forest is at risk of extinction if it is mined.

With the knowledge that the forest provides drinking water to five million people and harbours over 100 wildlife species, DiCaprio, in a tweet, said: “We must prioritise the protection of these irreplaceable places for a healthy planet.”

The forest is the source of three major rivers that provide water for five million Ghanaians. The Densu River, which flows from the Atewa Forest, feeds the Weija Reservoir that provides close to 2.5 million people in Accra with water.

It is also home to an estimated 165 million tonnes of bauxite, a sedimentary rock used to create aluminium products such as aircraft parts, kitchen utensils and beer cans.

The government of Ghana has, however, entered into a barter agreement – the Sinohydro deal – with Asian powerhouse, China, to mine Ghana’s bauxite in the forest reserve in exchange for $2 billion for infrastructural development in the West African country.

Despite opposition from a number of groups for the government to withdraw the agreement, President Akufo-Addo insists the mining of bauxite in the Atewa forest will be guided by best international practices and technology to ensure that the wildlife in the mining environment is not endangered.

Addressing the Sustainable Ocean Industries Conference organised under the auspices of the Petroleum Commission of Ghana, Aker Energy and the Norwegian Embassy in Ghana, as part of a two-day state visit by the Prime Minister of Norway to Ghana at the Labadi Beach Hotel, President Akufo-Addo, in an answer to a question about whether or not the mining of bauxite in the forest will not compromise the environment, said it was a very legitimate balance that ought to be struck and that the leadership of the country was looking to achieve the same balance.

“The technology of today is much more sensitive to these issues because of the pressure that is being brought on the bauxite and oil companies to take it into account. So, to some extent, beginning now, the full-scale exploitation of Ghanaian bauxite resources, we are in a better place, technology-wise, than we would have been 20, 30 years ago,” the President said.

The Ghanaian leader further stated that: “I am satisfied by what I have been told and what has been demonstrated to me that it is possible for us to get that red mud out without disturbing the wildlife there is in the Atewa mountains”.

Mr Ronald Abrahams, a chief officer of the Water Resources Commission, the government agency tasked with managing the use of Ghana’s water resources recently told the Washington Post that: “When you take the mountain off, you change the hydrology and ecology,” adding that: “It will not be the same. It will change everything, and we won’t have a source of a river which is so reliable and has served this nation for ages.”

The Christian Council of Ghana, an association of religious bodies, has also appealed to the government to reconsider its decision.

The Council said in a letter to the President that: “The extraction of bauxite will undoubtedly require the forest to be removed since the deposits are only within the top few metres of the horizon and spread over a wide area… The resulting landscape will be impossible to restore to its former condition because the organic layer will be removed during the mining and it would probably take centuries for the lost flora and fauna to be re-established if they are not entirely extinct.”

The Christian Council said instead of mining, the government should rather establish a national park in the forest. “Establishing a new national park is an option with great public support amongst the forest-urged communities who are so dependent on the forest. A new national park at Atewa forest can deliver sustainable jobs and livelihoods for many people and, as part of a living landscape, can provide new economic opportunities”.

What does Ghana stand to gain from the deal?

China has already released the first tranche of the $2 billion to the government of Ghana, Vice-President Dr Mahamudu Bawumia disclosed on Monday, 11 November 2019.

Despite these benefits, campaigners, water experts and environmentalists say the environmental cost will be too high for Ghana to bear.