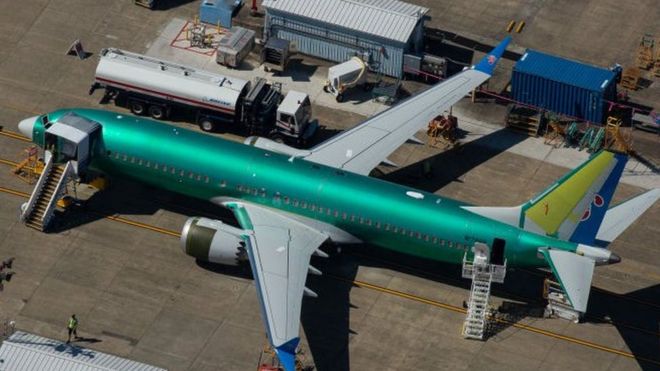 The release of a batch of internal messages has raised more questions about the safety of Boeing’s 737 Max.

In one of the communications, an employee said the plane was “designed by clowns”.

The planemaker described the communications as “completely unacceptable”.

The 737 Max was grounded in March 2019 after two fatal crashes in Indonesia and Ethiopia, which killed almost 350 people in total.

Boeing said it had released the hundreds of redacted messages as part of its commitment to transparency.

The Federal Aviation Administration (FAA) and US Congress were given unredacted versions of the communications last month.

“These communications do not reflect the company we are and need to be, and they are completely unacceptable,” Boeing said.

One unnamed employee wrote in an exchange of instant messages in April 2017: “This airplane is designed by clowns who in turn are supervised by monkeys.”

The documents, which have been published by the Washington Post, appear to show that Boeing rejected pilots being trained on simulators, which would have led to higher costs for its customers, making its aircraft less attractive.

“I want to stress the importance of holding firm that there will not be any type of simulator training required to transition from NG to Max,” Boeing’s 737 chief technical pilot at the time, Mark Forkner, said in a March 2017 email.

“Boeing will not allow that to happen. We’ll go face to face with any regulator who tries to make that a requirement.”

On Tuesday this week, Boeing reversed its position by recommending 737 Max simulator training for all pilots.