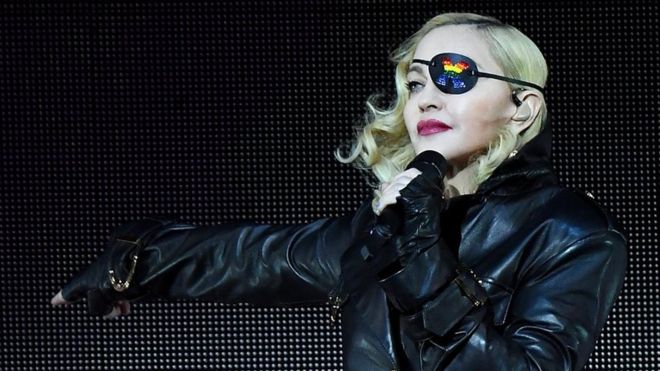 Madonna has cancelled another show on her Madame X world tour, as she battles an ongoing, but unspecified, injury.

The star gave fans in Lisbon just 45 minutes’ notice that her show on Sunday night was being called off.

“We regret to inform you that Madonna is unable to perform this evening,” an email informed ticketholders at 19:45. She had been due on stage at 20:30.

“Sorry I had to cancel tonight,” the star wrote on Instagram, “but I must listen to my body and rest!”

It is the eighth time Madonna has had to cancel a show on her current world tour, which sees her playing smaller, intimate theatre venues.

She has not revealed the nature her injury, but told one audience in San Francisco she was suffering from a “torn ligament” and “a bad knee” in November.

In a video posted to social media last week, she was shown wearing knee supports while rehearsing for an earlier show in Lisbon.

“How an injured Madame X warms up for a show,” she wrote in the caption. “Very carefully.”

The star has also shared videos of her taking post-show ice baths to help her cope with “multiple injuries” that are causing “overwhelming pain”.

Madonna began the current stage of her Madame X tour in Portugal’s Coliseu Dis Recreios theatre on 12 January, and had seemed to be in good spirits, interacting with the crowd and drinking port on stage.

“She did a great show here last night so you and the other fans are just really unlucky,” a staff member told BBC reporter John Hand, who had been due to attend the cancelled gig.

The tour is due to come to the UK on 27 January, with 15 shows planned at the London Palladium.