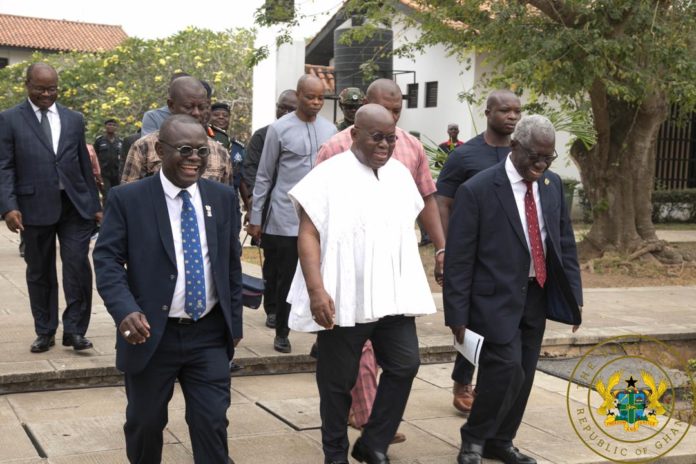 President Akufo-Addo says the Tamale demonstration undertaken by some opposition political parties regarding the voter’s register passed off without any incident, a clear departure from the unfortunate past.

According to President Akufo-Addo, “five (5) years ago, we had demonstrations in Accra calling for a new, credible register, in which some citizens were maimed and brutalised. Indeed, a citizen, young Justice Adzakuma, lost his eye, and died last year. May God bless his soul.”

He continued, “Today, we are having peaceful demonstrations in Tamale, this time protesting against the decision of the Electoral Commission, whose constitutional remit it is to compile an electoral register, to have now a new, improved register. Fortunately, in this new era, there are no casualties. God bless Ghana.”

The President made this known on Tuesday, 14th January, 2020, when he delivered the opening address at the 71st New Year School, at the Great Hall of the University of Ghana, Legon, on the theme “Attaining Ghana Beyond Aid: Challenges and Prospects.”

Stressing that “Ghana Beyond Aid is meant to be more than a slogan”, President Akufo-Addo stated that “it is meant to change our mindset from one of dependency, to one of achieving our destiny. It is meant to put us in charge of our own affairs, and make us truly independent.”

He, thus, urged the Ghanaian people to “believe in ourselves, we can do it, especially in this new decade, in this new century, in which hope, optimism and progress will define the unfolding Ghanaian reality.”

Describing the terrorist outrages taking place in the Sahel and in northern Nigeria as “the greatest security challenge facing the nations of ECOWAS”, President Akufo-Addo told the gathering that Armed Forces and security agencies have to be on full alert to confront this unwanted menace.

“We are the authors of the Accra Initiative, which seeks to strengthen co-ordination and co-operation between the security and intelligence agencies of Benin, Togo, Cote d’Ivoire, Burkina Faso and Ghana, who have lately been joined by Mali and Nige,” he said.

The President added that “We are required also to deny the terrorists and violent extremists any space by marshalling the rapid development of the areas in the northern parts of our country, which provide the most obvious targets of recruitment. We have to employ a comprehensive counter-terrorism strategy.”