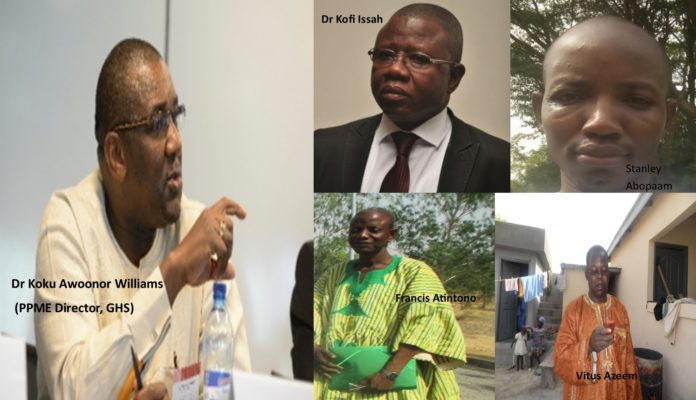 The Director in charge of Policy Planning Monitoring and Evaluation (PPME) at the Ghana Health Service (GHS), Dr Koku Awoonor, has sued a GHS director and three leading members of BONABOTO for defamation, saying they have presented him to the world as a thief.

The four individuals— Dr Kofi Issah, Stanley Abopaam, Francis Atintono and Vitus Azeem— will face topflight lawyer and a former Chief State Attorney, Bright O. Akwetey, at a high court in Accra to substantiate some accusations they made in public against the internationally known health expert.

The writ of summons, filed and dispatched in November, 2019, seeks Gh¢2 million from each of the four persons in compensatory and disciplinary damages over the accusations. Dr Awoonor is also seeking an order directed at each of the four defendants to retract their “false statements and utterances appropriately and publish same appropriately to repair the damage inflicted on” his image.

Dr Kofi Issah announced at a mid-year performance review event in 2016 in Bolgatanga that five official vehicles, owned by the GHS in the Upper East Region, could not be accounted for after Dr Awoonor had handed over the administration to him in 2015 as the Upper East Regional Director of Health Services. Government representatives, agencies of the United Nations, health stakeholders, foreign donor partners, traditional authorities, civil society groups and journalists were at the event. 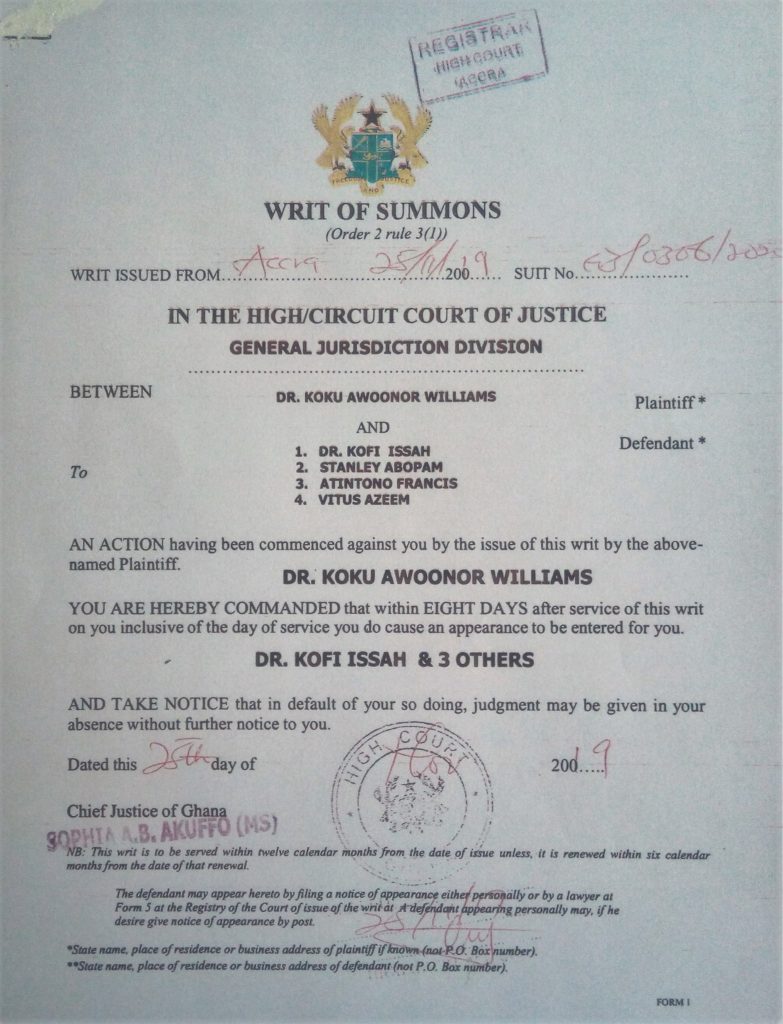 Following that announcement, BONABOTO, an association of some members of an ethnic grouping in the region, unleashed a strong public campaign against Dr Awoonor, using media outlets, both print and electronic, to accuse him of illegally moving (stealing) five vehicles out of the region from the GHS’s pool upon his transfer to Accra.

The then Director-General of the GHS, Dr Ebenezer Appiah-Denkyira, came under same BONABOTO attack, too, after he told the public the allegations levelled against Dr Awoonor were false and remarked that the vehicles were not missing but validly reallocated for a project. Some members of the group also waxed very hostile against any journalist whose reports seemed to establish that Dr Awoonor or Dr Appiah-Denkyira was just being discredited for no wrong done.

Open Attack on CHRAJ by BONABOTO

Led by Atintono, Abopaam and Azeem, the group took the campaign further by dragging both Dr Awoonor and Dr Appiah-Denkyira before Ghana’s main anti-corruption body, the Commission on Human Rights and Administrative Justice (CHRAJ), in 2017.

CHRAJ, after 18 months of wide-ranging investigations, cleared Dr Awoonor and Dr Appiah-Denkyira of any wrongdoing in 2018. Not satisfied, some BONABOTO members returned to the airwaves, lambasting CHRAJ and going even tougher on the targets of their campaign.

“We saw clearly the writings on the wall that there was a grand agenda to steal these vehicles by the actors, Dr Koku Awoonor and Dr Appiah-Denkyira. After Awoonor had left with the vehicles and we made the noise, CHRAJ now were conducting their investigation. There was an intention to steal and there was actual thievery. That is what we are saying.

“CHRAJ micromanaged the truth. They whitewashed it. They shambolically did this job. In fact, we concluded our press statement by saying that CHRAJ has now become a refuge for the awful and powerful in society to run under when they commit crimes. This work CHRAJ did was a botched job. That is significantly immaterial to our stolen five vehicles,” Stanley Abopaam stated on Word FM in the Upper East Region on Monday February 11, 2019.

In August 2019, another statement by BONABOTO, calling for an independent probe into “the missing vehicles” and “signed by Dr Andrews Akolaa and Denis Akugre”, emerged again on the website of a state-owned media outlet, the Ghana News Agency (GNA). Meanwhile, the defendants have filed their Statement of Defence.