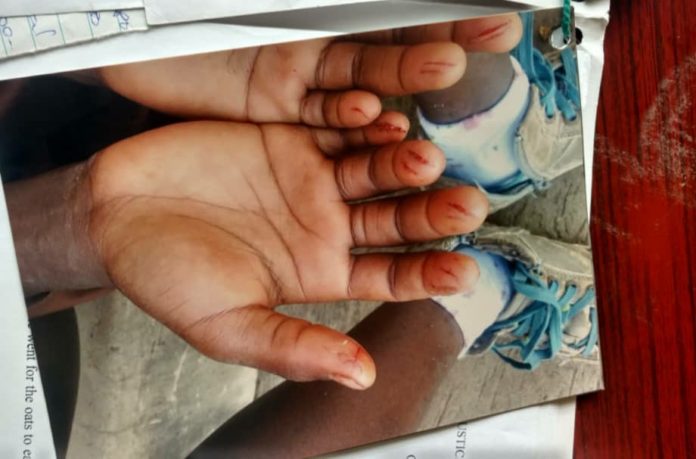 A 73-year-old retired Nurse has been fined by Koforidua Circuit Court ” B” for inflicting blade wounds on all ten fingers of her 11-year-old granddaughter over oatmeal.

The Victim, a class two pupil stays with the convicted Grandmother at Nsukwao a suburb of the New Juben South Municipality of the Eastern region.

The convict who is a diabetic patient prepared oatmeal for breakfast without adding sugar to it due to her condition.

The Victim who was hungry, poured sugar into the oatmeal and ate some.

The Grandmother became furious and informed the mother of the victim who stays in Akuse about the misconduct of her daughter.

Subsequently, she grabbed the victim and mercilessly inflicted blade wounds on all her ten fingers and left the child to her fate.

School Authorities noticed the wounds and the pain the traumatized victim was enduring when she reported to school the following day and reported the incident to the Commission on Human Rights and Administrative Justice (CHRAJ) which proceeded to lodge official complaint at Domestic Violence and Victim’s Support Unit(DOVVSU) leading to the arrest of the convict in her house.

Police medical form was issued for the treatment at the victim at the Eastern Regional Hospital, Koforidua, according to DSP Ebenezer Tetteh, the Public Relations Officer of the Regional Police Command.

The convict admitted the offence and was charged but was granted bail. She was put before the Koforidua Circuit Court” B” on Monday where she was convicted by the Presiding Judge Her Honour Mercy Adei Kotei on her own plea of guilty.