According to the former downstream petroleum boss, GOIL’s percentage price drop is insignificant as the price of oil on the international market has fallen hugely.

“Oil prices down 7.5%, cedi appreciates from 5.7 to 5.25 nearly 7.5% and government reduces fuel prices by less than 0.2%. Are we joking in this country,” he posted on his Facebook timeline.

“This Government seems insensitive to the sufferings of majority of the citizens and rather seems to favor the few that control the economy,” he emphasized.

His comments come on the back of the Ghana Oil Company Ltd, GOIL, announcing a reduced fuel price at all its retail outlets with effect from Saturday, February 22, 2020.

The price change is in line with the drop in international petroleum prices and relative stability of the cedi.

In a release issued by GOIL, the indigenous petroleum company said a litre of its newly introduced SuperXP RON 95 is now 5.40 cedis while Diesel will now sell at 5.41 cedis.

The reduction also results from the recent introduction of higher grade Super XP (RON 95) onto the market at no extra cost to customers.

“GOIL wishes to thank consumers for their immense support and patronage of the company’s products and services,” said Robert Kyere, Public Relations Manager, in the release. 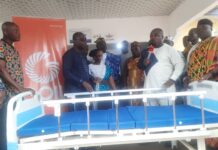