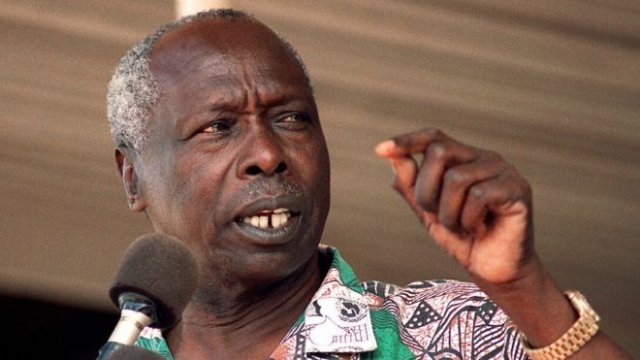 Kenya’s longest-serving President Daniel arap Moi who died on Monday rose to power in 1978 upon the death of Kenya’s first President Jomo Kenyatta.

This was his first major political victory having outmanoeuvred Kenyatta’s inner circle to rise to the top. This shrewdness became the hallmark of his 24-year reign.

In his early days he rallied Kenyans to join him in building the country behind the popular slogan “Nyayo” which is Swahili for footsteps.

But after the attempt to overthrow him in 1982 Moi transformed into a dictator who viciously clamped down on freedoms.

The word Nyayo changed from a patriotic call to a chilling reminder of torture chambers where many civilians and perceived anti-government politicians alike were persecuted and detained without trial.

By 1990 President Moi was a pariah and amid international sanctions he faced mounting pressure to introduce multi-party democracy and presidential term limits.

His government responded to protests by setting baton-wielding police on opposition leaders and supporters, but eventually he yielded. Then, with a divided opposition, he won back-to-back elections in 1992 and 1997.

Major corruption scandals blighted his legacy – the most prominent of these was the billion-dollar Goldenberg scandal involving fictitious exports of gold in which he was directly implicated. He always denied the allegations.

When his two terms ended in 2002, Moi favoured Uhuru Kenyatta as his successor but Uhuru lost by a landslide to an opposition coalition led by Mwai Kibaki.

Moi then retired, facing the jeers of thousands as he handed over power to Kibaki.

Analysts say he continued to influence Kenyan politics in the background, as influential government officials and members of parliament sought his counsel even in his retirement.