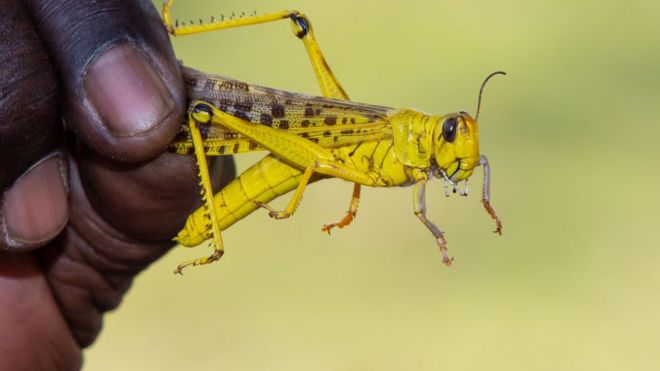 The East African region could be on the verge of famine if huge swarms of locusts devouring crops and pasture are not brought under control, a top UN official has told the BBC.

It would create a food crisis, Dominique Burgeon, director of emergencies for the UN’s Food and Agriculture Organisation (FAO), said.

Efforts to control the infestation have so far not been effective.

Aerial spraying of pesticides is the most effective way of fighting the swarms but countries in the region do not have the right resources.

There are fears that the locusts – already in the hundreds of billions – will multiply further.

The FAO says the insects are breeding so fast that numbers could grow 500 times by June.

The UN body has now called on the international community to provide nearly $76m (£58m) to fund the spraying of the affected areas with insecticide.

“If it doesn’t, the situation will deteriorate and then you will need to provide massive food assistance for a humanitarian situation that may even get out of control,” Mr Burgeon said.

The locust invasion is the worst infestation in Kenya for 70 years and the worst in Somalia and Ethiopia for 25 years.

Somalia has declared a national emergency in response to the crisis.

The Ethiopian government has called for “immediate action” to deal with the problem affecting four of the country’s nine states.

Kenya has deployed aircrafts to spray pesticides in several regions, while Uganda plans to send soldiers to northern regions to spray the affected areas.

The locusts are thought to have spread from Yemen three months ago.