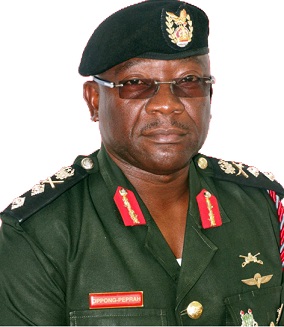 A statement signed by the Director of Communications at the Presidency, Eugene Arhin, stated that “following the completion of the tour of duty and subsequent retirement from the Ghana Armed Forces of Major General William Ayamdo, the Chief of Army Staff, the President of the Republic, Nana Addo Dankwa Akufo-Addo, has, in consultation with the Council of State, appointed Major General Thomas Oppong-Peprah, currently Chief of Staff at General Headquarters of the Ghana Armed Forces, as the new Chief of Army Staff, effective Tuesday, 18th February, 2020.”

The statement added that on the recommendation of the Armed Forces Council, the President has appointed Commodore Issah Adams Yakubu as the new Chief of Staff at General Headquarters of the Ghana Armed Forces to succeed Major General Oppong-Peprah, effective Wednesday, 19th February 2020.

Commodore Yakubu is also promoted to the rank of Rear-Admiral on the same date.

Additionally, following the completion of the tour of duty and subsequent retirement from the Ghana Armed Forces of Major General Omane Agyekum, the Commandant of the Military Academy and Training Schools (MATS), the President has, on the recommendation of the Armed Forces Council, appointed Brigadier General C.K. Awity as the new Commandant of MATS, effective Wednesday, 19th February 2020. He is also promoted to the rank of Major General on the same date.

The statement concluded that President Akufo-Addo has expressed his gratitude to Generals Ayamdo and Omane Agyekum for their dedicated and meritorious services to the Ghana Armed Forces and to the nation.

Major General Thomas Oppong-Peprah was commissioned into the Ghana Armed Forces in 1986 as part of Regular Career Course 26 and was posted to the Armour Recognisance Regiment.

His civil educational qualifications include a Master of Arts in International Security and Strategy from Kings College, London ( 2013 – 2014) and an Executive Master of Business Administration (Human Resource Management) from University of Ghana, Legon (2006 – 2007).

Appointments held in the course of his career include Aide-de-Camp to the Chief of the Army Staff and Chief of the Defence Staff, Ghana Armed Forces (1995 – 1997), Operations/Training Officer, 64 Infantry Regiment, (1999 – 2000).

Prior to his current appointment as the Chief of Staff at the General Headquarters, he was the General Officer Commanding, Southern Command of the Ghana Army (Feb 17 – Jan 19).

He is a Board member of the Governing Council of the National Disaster Management Organisation (NADMO).