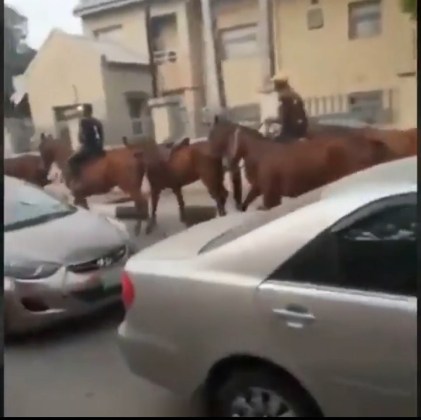 Following the ban on motorcycle and tricycles on major roads in Lagos state, residents have opted for the use of horses as a means of transportation in the megacity.

In a video which has gone viral on social media, some people were seen opting for horses in order to get to their destinations.

The situation as shown in the video has rendered many people stranded and unable to reach their destinations in time.

Lagos, the 7th largest economy in Africa and the commercial centre of Nigeria, is known for traffic congestion that many have described as ‘hellish’.

The State Government had last Tuesday outlawed the operations of commercial motorcycles riders also know as Okada as well as tricycle operators also known as Keke Marwa in six local government areas of the state.

The enforcement of the ban started on Saturday, February 1, 2020. The police said about 40 violators were arrested while about 188 motorcycles and 78 Keke Marwa were impounded.

In a press conference last week, the Commissioner for Information and Strategy, Gbenga Omotosho, said the ban is part of the state government’s effort to address security and traffic challenges in the city.

“This is the first stage of the State Government’s plan to sanitise our roads and protect Lagosians from the negative effects of these illegal modes of transportation,” he said.

However, Nigerians took to the social media to express mixed reactions over the effect of the ban on their daily activities.