The incumbent Member of Parliament (MP) for Adansi Asokwa Constituency in the Ashanti region Kwabena Tahiru Hammond known in Politics as K.T Hammond is seeking support from traditional leaders of Adansi to stop Mr Sammy Binfo Dakwa from contesting him in the upcoming parliamentary primaries of the ruling New Patriotic Party (NPP).

The Adansihemaa Nana Amanimaa Dade II reportedly invited the Constituency Chairman, Mr. Kwame Owusu to her Palace and pleaded with him to allow K.T Hammond to run in primaries unopposed to guarantee him a sixth term in parliament.

However, Chairman Owusu said he politely requested of the Queen mother to stay out of the party’s internal contest, to allow the delegates of the constituency to choose their Parliamentary Candidate for the party.

Chairman Owusu confirmed to Ultimate FM’s Isaac Bediako in telephone a conversation of honouring such a meeting with the Queen Mother.

“Yes, I was invited by Adansihemaa for a meeting on last Sunday, Nana told me that our MP has put before her and other Chiefs to plead on his behalf so that I will let him run unopposed in the upcoming parliamentary primaries. I simply told Nana Amoanimaa with all respect that, there’s nothing I can do as a Chairman because all interested people in the contest have already picked their nomination forms at a cost. So I told Nana to allow the party delegates to have a say in electing their favourite PC since 1992. Nananom have also agreed with my justification for election,’’ Chairman Owusu said.

He maintained that for the first time in over 2 decades, the constituency delegates will have an opportunity to choose their parliamentary candidates.

“So far, as I remain NPP Chairman of the constituency with support of my abled executives, nothing has changed for now. There will be an election in Adansi Asokwa, whoever is elected as our PC, we will all rally behind him going into Election 2020,’’ he said.

When contacted to make a statement on the matter, the Queen Mother declined to either confirm or deny whether she had invited Chairman Owusu to such a meeting at her palace.
“My son Otumfuo has advised us- Nananom, not to mingle in party politics,’’ the Queen Mother said.

So far, Mr Dakwa is the only aspiring candidate who has picked nomination forms to contest against the incumbent MP K.T Hammond in the upcoming NPP parliamentary primaries.

The Adansi Asokwa constituency has since 1992 not held parliamentary primaries in the constituency under the tenure of three different chairpersons for the past 20 years a situation many party executives have boldly criticized.

K.T Hammond, however, rejected these claims in a media encounter that he manipulated the process in his favour to contest unopposed in the past.

“For about 3 or 4 elections now, I’ve been contested on each occasion. It just happens that each time, almost invariably they had not qualified, and I don’t have it within me, it is not in my capacity to disqualify anybody.

“ There is a vetting committee invariably put in place at a time like this, which by the tenents of the NPP constitution has certain specific rules about who contest to become a Member of Parliament. The first one was actually disqualified at the Asokwa level, not by me but a committee in place, the second one at the regional level, the third one at the national level, ” K.T Hammond said.

He also denied reports he had returned his nomination forms unfilled thus bowing out of the contest. The former Deputy Energy said he is still in the race to represent the constituency for the fifth time.

K.T Hammond accused some constituency executives including the Chairman Owusu of attempts to deny him access to nomination forms.

He disclosed he has managed to secure forms, filled and ready for submission to face off with Mr Dakwa whom he argues is alien to the constituency. 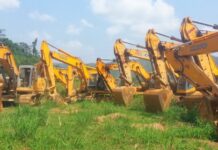