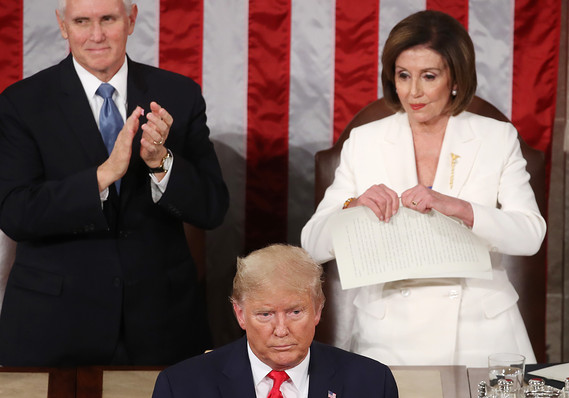 House Speaker Nancy Pelosi on Tuesday night tore up a copy of President Donald Trump’s State of the Union speech, telling reporters later “it was the courteous thing to do, considering the alternative. It was such a dirty speech.”

The California Democrat, whose party has voted to impeach Trump, earlier could be seen extending her hand to the president before he gave his annual address. But he didn’t see it — or ignored it.

The speech came a day ahead of his expected acquittal in his impeachment trial.

In his address, Trump bashed Democrats over health care and immigration but also said he was willing to work with them on lowering prescription drug costs and building infrastructure.

The Republican president delivered Tuesday night’s nationally televised speech in the Democratic-controlled House of Representatives, where he was impeached in December.

His trial in the upper chamber, the Senate, culminates on Wednesday but with Republicans in charge there he is all but certain to be cleared and escape being thrown out of office.

Mr Trump did not mention impeachment at all in his speech although he did jab at Democrats.

The State of the Union address is a speech delivered by the president to Congress towards the beginning of each calendar year in office.

It is usually used as a chance to report on the condition of the nation, but also allows the president to outline a legislative agenda and national priorities.

Why did Trump and Pelosi clash?

Ms Pelosi has been one of the president’s fiercest critics – she was the one who first launched formal impeachment efforts last year. Mr Trump has frequently taunted her as “Crazy Nancy”.

It was the first time the two had come face-to-face since she stormed out of a White House meeting four months ago.

Before Mr Trump began speaking at the podium in the well of the House, he appeared to snub the outstretched hand of Mrs Pelosi, America’s most powerful elected Democrat.

The House speaker, critics noticed, skipped the traditional introduction welcoming the president as a “distinct honour”.

She stunned onlookers by shredding a copy of the president’s remarks as he concluded.

Mrs Pelosi told reporters afterwards her gesture was “the courteous thing to do, considering the alternatives”.

She did rise to applaud the president more than once, including when he promoted his pet project of infrastructure investment, a possible area of bipartisan co-operation.

What else did the president say?

Mr Trump struck an upbeat note in a speech lasting one hour and 18 minutes that contrasted sharply with his lament of “American carnage” in his 2017 inaugural presidential address.

In an implicit rebuke to his predecessor Barack Obama, the president told his audience: “In just three short years, we have shattered the mentality of American decline and we have rejected the downsizing of America’s destiny.

“We are moving forward at a pace that was unimaginable just a short time ago, and we are never going back!”

Mr Trump repeatedly swiped at Democrats, including left-wing candidates such as Bernie Sanders, who are vying to challenge him for the presidency.

“We will never let socialism destroy American healthcare!” said the president, whose critics point out that he has not put forward a healthcare plan of his own.

Who else was there?

As is tradition, the president invited several special guests, including Venezuelan opposition leader Juan Guaidó, military veterans and the brother of a man killed by an undocumented immigrant.

In a move certain to infuriate liberal critics, Mr Trump announced he would award the Presidential Medal of Freedom, America’s highest civilian honour, to firebrand conservative radio host Rush Limbaugh, who revealed this week he has lung cancer.

First Lady Melania Trump bestowed the honour on an emotional Mr Limbaugh as the president spoke.

A protester was escorted from the chamber while Mr Trump defended gun rights. It was Fred Guttenberg, the father of Jaime Guttenberg, a student killed in a mass school shooting at Parkland, Florida, in February 2018.

Mr Guttenberg was a guest of Mrs Pelosi.

How did Democrats respond?

Each year after the State of the Union speech, a member of the main opposition party is tasked with responding and this year it fell to Michigan Governor Gretchen Whitmer.

She accused the president of failing to fix America’s problems. “Bullying people on Twitter doesn’t fix bridges – it burns them,” she said.

As they did last year, many female Democrats – including Mrs Pelosi – wore white as tribute to the suffragettes who won the vote for US women a century ago.

Ms Ocasio-Cortez tweeted that she would “not use my presence at a state ceremony to normalize Trump’s lawless conduct & subversion of the Constitution”.

Other left-wing Democrats, including Rashida Tlaib of Michigan, walked out during Mr Trump’s speech.

Who was the designated survivor?

As is traditional during the State of the Union, one member of the president’s cabinet did not attend the address.

He or she remains at a secret location to make sure the government can continue should calamity befall the nation’s president, vice-president and other top leaders.

That person, who is known as the designated survivor, was Interior Secretary David Bernhardt on Tuesday night.