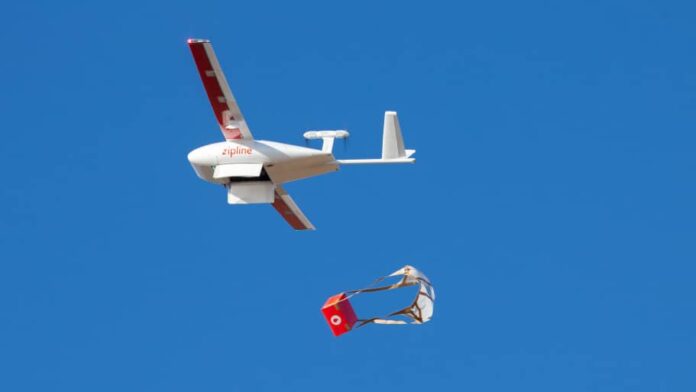 Zipline has begun safety tests on its high-performance drones in readiness of the opening of the third and fourth distribution centers.

Since launching in Ghana, Zipline said, has delivered over 20,000 units of blood, vaccines and critical medicines to patients in need at more than 350 health facilities over the course of more than 4000 flights from  distribution centers in Omenako and Mpanya.

In a statement, the company noted: “Over the next four months, we’ll be opening our third and fourth distribution centeres in Vobsi in the North East Regions and Sefwi Wiaso in the Western Regions as we expand to serve close to 2,000 health facilities.

“A key part of what will allow us to make that expansion possible and serve even more patients in need across the country is deploying a brand-new generation of drone, which flies further, faster and can carry more medicine.

“Over the next several weeks, we’ll be testing the flight safety features of the new drone, which includes the parachute landing system, before the aircraft enters full service. Yesterday, we conducted just such a successful test from our Mpanya Center”.

it added: “The parachute landing feature allows our plane to safely land in the event of things like unexpected bad weather, or emergency requests from air traffic control.

“So if you see one of our drones making a parachute landing, know that it is an important part of what makes Zipline the safest and most reliable instant drone delivery service in the world.

“Safety is our top priority and that’s why we have built it into everything we do. Serving patients in Ghana is a tremendous honor. And we are humbled by the opportunity to help improve the lives of people across the country”.