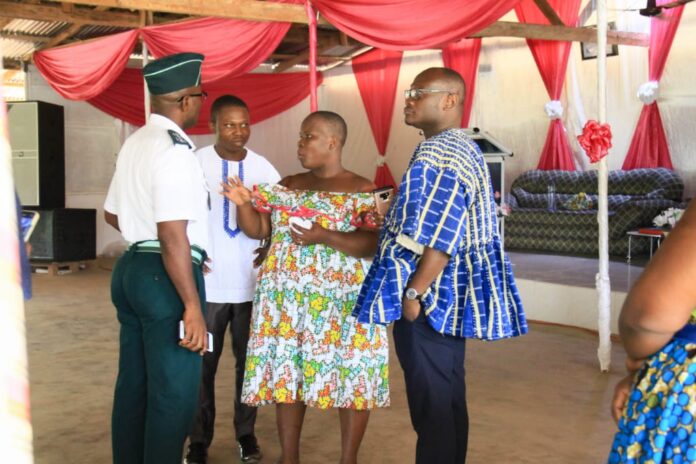 The Akuapem South District Security Council (DISEC) has arrested a Prophetess and a Church Elder at Pokrom near Aburi in the Eastern region for holding a Church service.

The Prophetess identified as Mrs Veronica Okai is the Founder/Overseer of The Break of Mountains Jesus Prayer camp located at the Pokrom Community.

She was arrested together with an Elder of the Church Wednesday afternoon at about 12:45 pm whilst holding church service.

The Prayer camp has since been shut down by the team led by the District Chief Executive for Akuapem South Frank Aidoo, accompanied by some armed Police officers and personnel from the Ambulance Service, Fire Service and some Health officials.

According to the District Chief Executive for Akuapem South who doubles as the Chairman of the DISEC, the action was taken to enforce the directive of the President on the suspension of public gatherings including Church service for four weeks as part of measures to control the spread of the coronavirus which has infected seven (7) people in Ghana.

“On Monday we held a meeting with all religious leaders in the district and gave them letters to reinforce the directive of the President on public gathering so that they communicate same to their members,” the DCE said.

He added “but we had information that the Prophotesss was having a church service with almost about 200 people which we saw as direct defiance to the President’s directive. So as District Security Council we are in charge of security here so we stormed there today to stop the service. We explained to the Church members, most of the congregants acknowledged hearing the suspension on Church service but said they were bused to the place. We have handed her and one other Elder we arrested to the Aburi Police.”

The arrest comes after the Head Pastor of the Open Arms Ministry in North Suntreso in Kumasi, Ashanti region, was also arrested Wednesday by the Police for failing to adhere to the President’s directive banning all public gatherings due to the spread of the deadly COVID-19 in the country.