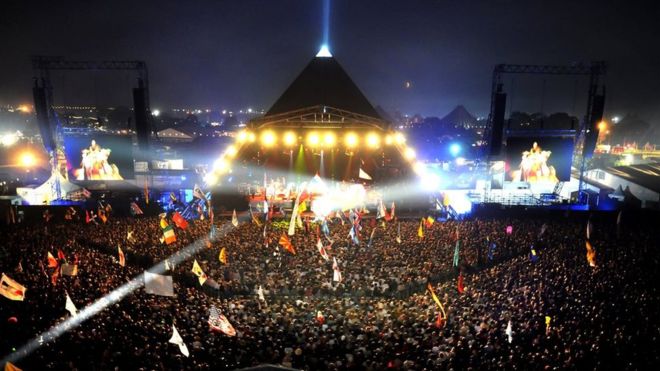 Glastonbury’s famous Pyramid Stage will remain dark in June, as the festival becomes the latest event to be cancelled due to coronavirus.

Taylor Swift, Paul McCartney and Kendrick Lamar were due to appear, alongside Diana Ross and Dua Lipa.

“We’re so sorry that this decision has been made,” a statement said. “It was not through choice.”

Just six days ago, organiser Emily Eavis said she had “fingers firmly crossed” the event would go ahead.

But after the government advised people to avoid mass gatherings on Monday, cancellation became increasingly likely.

Organisers took the decision before 1 April, when festival-goers were expected to pay the remaining balance of their £270 tickets.

Fans who had already paid the £50 deposit will be allowed to roll over that sum to next year, guaranteeing “the opportunity to buy a ticket for Glastonbury 2021”, organisers said. Refunds will also be available for those who want them.

More than 200,000 people, including 135,000 ticket-holders, would have descended on Worthy Farm in Somerset if the festival had gone ahead as planned from 24 to 28 June.

“We very much hope that the situation in the UK will have improved enormously by the end of June,” said Michael and Emily Eavis in a statement.

“But even if it has, we are no longer able to spend the next three months with thousands of crew here on the farm, helping us with the enormous job of building the infrastructure and attractions.”

Saying 2020 would now be an “enforced fallow year” for the festival, they apologised for letting fans down.

“We were so looking forward to welcoming you all for our 50th anniversary with a line-up full of fantastic artists and performers that we were incredibly proud to have booked.”

They added: “We look forward to welcoming you back to these fields next year and until then, we send our love and support to all of you.”

Glastonbury’s cancellation comes after BBC Radio 1 cancelled plans to host its Big Weekend festival in Dundee in May.

It will also call into doubt the viability of other UK festivals, including BST Hyde Park, All Points East, Lovebox and Latitude. Questions are also being raised about whether the Eurovision Song Contest can proceed as planned in May.

In the US, the Coachella and South By Southwest festivals have already been postponed or called off, while concert giants Live Nation and AEG have halted all forthcoming concert tours, with acts like Celine Dion, The Who and Billie Eilish among the artists postponing dates.

But many artists – including Coldplay, Christine and the Queens and Yungblud – have started to live-stream concerts to keep fans’ spirits up during self-isolation.

Bruce Springsteen also uploaded a full 2009 concert with the E Street Band to YouTube, telling fans to “practice social distancing and stream” live music “from the comfort of your own home”.