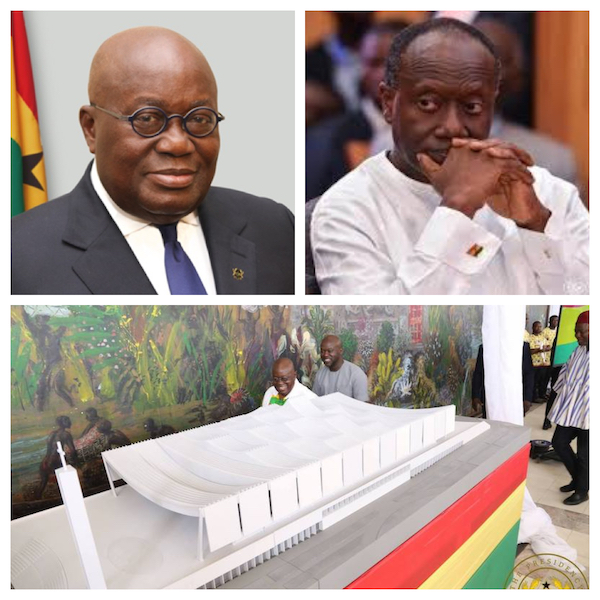 It is not that far-fetched, believe me…

I decided to do a little reading into cathedrals before I sat down at my writing desk to do this lament and discovered interesting insights into the differences between a cathedral and other places of Christian devotion, like basilica, temple, church, chapel, shrine, and even grotto. A few years ago, I served on the Charities Board of the Church of Jesus Christ of Latter Day Saints (LDS). Their temple is very imposing on Independence Avenue in Accra. The Jehovah’s Witnesses, I believe also have “Kingdom Halls” strewn all over the place.  The Catholics have very specific roles for their cathedrals and what they represent in a diocese. Their cathedral at Adabraka in Accra is awe-inspiring. The main protestant denominations are equally well endowed. The new-fangled charismatics and evangelicals flaunt their mega auditoriums from where they film their mega productions for television. It would seem, therefore, that, there is no shortage of space for Christian worship in Ghana for the state to interfere with a cathedral!

Democracy, we are told is preferable to any other form of political organization. True, but democracy, like the Dickensian view of the law being an ass, can also be abused and be a pain in other parts of the human anatomy not appropriate for printing, or else, how could we sit, stand, or lie down and allow this hubristic ego trip called “National Cathedral” to take off? In a dictatorship it is possible because that is what dictators old time monarchs do: They dictate. In a democracy, it is not supposed to be so, but it is also possible to dictate, with the peoples’ mandate cited as justification. Election intoxication often imbues some politicians with their own sense of messianic importance.

I am rather surprised at how all sorts of people, otherwise upright pillars of society, have allowed themselves to be complicit directly or indirectly in this caper. When some of these pillars lined up recently to cut sod on this project, I was left speechless. But in fairness, not all Ghanaian Christians are enthused by it. I have heard some uncharitable ones grousing about the occult – what with a stone from Israel showing up to be added to the foundation as if that is what is required to validate the sanctity of the stones of our dear country? Israel, a country that does not even believe in Christ as a Saviour or Messiah is the country which more or less consecrates the cathedral with a stone from that country’s politicians! In Israel itself, the followers of the Judaic faith supplicate to the Creator in synagogues, not cathedrals.

I thought, after so much public disquiet about this “priority of priorities” project, the damn thing would have been shelved, or in the overall Ghanaian multi-faith interest, converted into something more uniting and useful for the nation, like President Nkrumah’s Job 600 or President Rawlings’ National Theatre and Accra International Conference Centre, or President Kufuor’s Jubilee House or President Mahama’s Terminal 3 at KIA. A “Centre for Non-Violence in Politics” or “Centre for Inter-Party Dialogue and Peace Making” or “Centre for Religious Tolerance”, etc., would have been high ideals we would have all bought into.

I could not help but delve into the little I know of what the “national” cathedral is driving at: the supremacy and domination of one faith over all others in Ghana.  No matter the demographics, Ghana is a secular democracy. The founding father of the modern nation state of Ghana. Osagyefo Dr. Kwame Nkrumah started us off on a clean sheet of multi-ethnic, multi-faith, multi-cultural tolerance, which has served us very well until very recently, with all this talk of “pledge to my God to build a cathedral”.

President Rawlings was, like President Nkrumah, forward-looking when he did right in redressing a discriminatory exclusion of Muslims from our calendar of national holidays by legislating the Eid-ul-Fitr and Eid-ul-Adha celebrations into national holidays. Now we are witnessing religious discrimination as official policy with a Christocentric edifice that would soon be a brooding presence in our collective public space with the connivance of the presidency!

Hopefully, the day would come soon when we will have a “Traditional Day” national holiday to commemorate what our heritage bequeathed us before the arrival of Europeans and Arabs which our chiefs and traditional rulers are now custodians of.

I come from a Muslim background and my wife from a Christian. We have been together for over 30 years and have lived harmoniously, with religion never coming up to disturb what God has brought together because even at that microcosmic level, we have insisted on respecting our different faiths, not allowing our common space to be taken over by either of us, so for me, anything, and I mean anything, that tries, directly or indirectly, to disturb this delicate balance, meets with my conscientious objection.

For a politician to try to impose his ego tripping on my country with a so called national cathedral, smells to high heaven – pun very well intended! But who am I? The proposer says it was a promise he made to his God, which is okay, but I ask: Why did he not buy a plot of land somewhere in Kyebi to put up his shrine, instead of dragging all of us into it with a prime place of honour on our collective real estate? I will tell you what it is: If subjected to an impartial constitutional audit, the following conclusions would be arrived at: Abuse of office/mandate. Corruption. Dictatorial tendencies.

All over the world, people have built structures, like Alhaji Asoma Banda’s mosque at the Airport Residential Area in Accra, to show glory to their creator, without resorting to state intervention…

I have no objection to architectural landmarks. The so called national cathedral may even be beautiful – architecture is art – but it will forever remain an eyesore due to its bigotry. It is sectarian in nature and would be a reference point to “Them and Us” in multi-faith terms – what they did when we gave them power. It cannot pass muster in any properly functioning secular democracy and has made us into the laughing stock of Africa – an embarrassment. I have heard the sniggers…

Enter Corona Virus. The scare is justified. The killer virus (bacteria) of 1918, sometimes called Spanish flu or Swine Flu affected over a billion people and killed over 40 million. No part of the globe was spared. Corona does not seem to have the virulence of the 1918 pandemic, in which you could seem well in the morning and dead by midday, but nevertheless is as contagious. As the world of 2020 rallies to contain its own menace, many palliatives, as well as bold attempts at finding a cure have come up. Among the palliatives are the strictures leading to a global lockdown with Ghana joining the league of other nations to shut down schools and restrict social contact including congregational prayers in churches (cathedrals) and mosques, proving yet again, that the cathedral of worship is in human hearts and not fancy buildings. Corona is imperceptibly, but effectively, making this generation of the human race question many things, including long held predilections of faith. The new reality is “Social Distancing”…

Uniting humanity to pursue common interests of survival has eluded mankind for as long as our race’s history can be recalled. Religion, especially, which makes many claims to its hold on divinity has been particularly unsuccessful there. This is why as much as possible sectarian religious intrusions in governance, like this so called national cathedral, are kept at bay in modern democratic conventions like Ghana’s constitutional dispensation.

By the time Corona is done with us, or we are done with it, many “values” would also have come under serious questioning and threat.

Already facing questioning is the cathedral, which is costing over one hundred million US dollars to construct, while first class health facilities started by the former government have been left to rot, and now we are slinking to the IMF, calabash in hand, to beg for the same amount to fight Corona. And oh, whatever happened to “Ghana Beyond Aid”? There is no irony here but folly! Big time! And all those who have lined up to applaud this folly must call to mind the king’s new clothes! Using an electoral mandate to pursue a personal discriminatory proselytising agenda is not only insensitive and divisive, but worse, provocative.

By the way, has anyone noticed that Dum Sor is back, even after President Mahama had sorted it out before leaving office? Indeed, those who came after him even accused him of having created excess capacity! So what’s up? Where are the critical voices of 2016? Electricity outages by any means are still Dum Sor!