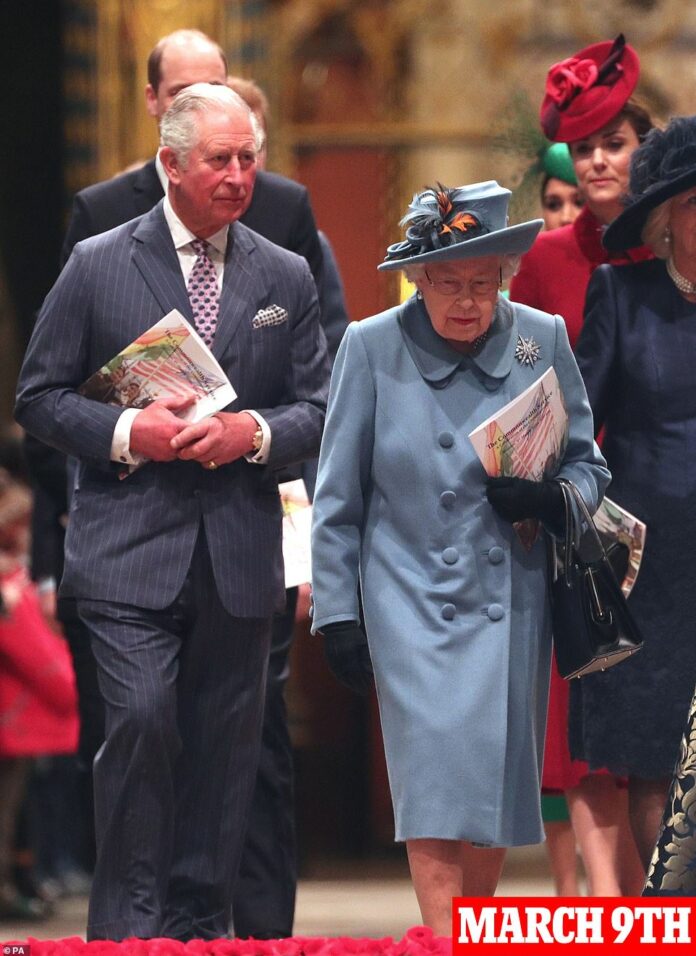 Prince Charles has coronavirus and may have been contagious just 24 hours after last seeing his 93-year-old mother the Queen, who is well but has been taking medical advice since her son fell ill, it was revealed today.

The Prince of Wales, 71, tested positive yesterday and is in self-isolation on the Balmoral estate in Scotland with his wife Camilla, the Duchess of Cornwall, who is without any symptoms of the virus, which has killed 435 and infected 8,000 more in the UK so far.

A royal source said Charles’ doctor’s most conservative estimate was that the prince was contagious on March 13 – 24 hours after he last saw his mother. A Buckingham Palace spokesman has said: ‘Her Majesty remains in good health. The Queen is following all the appropriate advice with regard to her welfare’.

MailOnline has plotted the prince’s movement over the past fortnight – the incubation period for coronavirus – and he attended at least six public engagements meeting hundreds of people including a string of Britain’s biggest stars at his annual Prince’s Trust awards.

Charles is said to have ‘mild symptoms’ that started over the weekend and has fallen ill after meeting coronavirus-stricken Prince Albert of Monaco, who tested positive five days ago after he sat opposite the Prince of Wales at a WaterAid event in London on March 10.

A Clarence House spokesman said: ‘The Prince of Wales has tested positive for Coronavirus. He has been displaying mild symptoms but otherwise remains in good health and has been working from home throughout the last few days as usual.

‘The Duchess of Cornwall has also been tested but does not have the virus. In accordance with Government and medical advice, the Prince and the Duchess are now self-isolating at home in Scotland. The tests were carried out by the NHS in Aberdeenshire where they met the criteria required for testing’.

Charles’ spokesman said it was impossible to say where he caught it from because of the large number of public engagements he has carried out in ‘recent weeks’ – but it will raise questions over whether he got it from Prince Albert and if the heir to the throne has spread it himself.

The Prince of Wales was last at Buckingham Palace on March 12, where he ‘briefly’ saw the Queen, and his illness will raise fears for the health of elderly royals including his mother and Prince Philip, who are together at Windsor Castle.

Charles is understood not to have seen Prince Philip for many weeks, possibly during the Megxit crisis talks at Sandringham, where his 98-year-old father was based until he flew by helicopter to Windsor last Thursday.

William and Kate are at Anmer Hall in Norfolk, while Harry and Meghan are back in Canada, after both couples saw Charles at the Commonwealth service at Westminster on March 9. He also met with a string of celebrities at the Prince’s Trust Awards 2020 in London, attended by Ant and Dec, Philip Schofield, Fearne Cotton, Pierce Brosnan, Richard E Grant, Rolling Stones star Ronnie Wood, X Factor star Fleur East, Dina Asher-Smith and Craig David.

On  the evening of March 12, after investitures at Buckingham Palace, The Prince of Wales with the Lord Mayor of the City of London and the High Commissioner for Australia at a Mansion House in London, his last known engagement.

As coronavirus reached the royal family on the second day of Britain’s lockdown, it has also emerged:

Until he fell ill, Prince Charles, the heir to the throne has been continuing to carry out public engagements despite the coronavirus crisis – but has avoided shaking hands, instead using a namaste gesture.

Arriving at the Prince’s Trust awards a fortnight ago, Charles twice extended his hand to greet people before withdrawing it at the last minute in mock horror and greeting then with a bow and the Hindi greeting ‘Namaste’.

Turning to Dame Martina Milburn, the Trust’s chief executive, the prince said: ‘It’s just so hard to remember not to.’

At the Commonwealth Service at Westminster Abbey on Monday, no members of the royal family shook hands, with the Prince greeting people with Namastes and the Duke of Sussex elbow bumping Craig David.

But despite avoiding close contact with people he has caught Covid-19 – and it came days after a member of Buckingham Palace staff tested positive for coronavirus.

The Royal Family appeared to have already prepared for the eventuality that one of them could be diagnosed with coronavirus, having been split up across Britain – away from London.

The Queen is with Prince Philip at Windsor Castle, Prince William and Kate are at Amner Hall in Norfolk, and Charles and Camilla are at Balmoral in Aberdeenshire.

Charles’s last public engagement was on March 12, but he did have a number of private meetings with Highgrove and Duchy individuals, all of whom have been made aware.

They added that Charles has not seen the Queen since before March 13. A small number of people living and working at Birkhall are remaining at the residence and self-isolating.

The source said the prince and the duchess remained in good spirits, and the prince was up and about and not bedridden.

Medical advice is that it is unlikely to escalate into a more serious case. Charles has spoken to his sons the Duke of Cambridge and the Duke of Sussex, as well as the Queen.

Charles had been displaying ‘mild symptoms’ over the weekend before being tested on Monday.

The heir to the throne’s last public engagement was on March 12 when he attended a Mansion House dinner hosted by William Russell, Lord Mayor of the City of London, and George Brandis, the High Commissioner for Australia, in aid of the Australian bushfire relief and recovery effort.

Sometime during the day the prince saw the Queen privately.

A member of the Scottish Parliament has expressed surprise that the Prince of Wales was tested for Covid-19 on the NHS.

Joan McAlpine, SNP MSP for the South of Scotland, tweeted that she wishes Charles a speedy recovery, but added: ‘Given that his symptoms are said to be mild, like many I wonder how he was tested when many NHS and social care workers cannot get tested.

‘My nephew, who has serious asthma and a chest infection was recently refused a test. £coronavirus.’

It comes after Clarence House said Charles and the Duchess of Cornwall were tested on the NHS in Aberdeenshire, where they are currently staying, as ‘they met the criteria required for testing’.

The NHS Scotland website says people will only generally be tested for Covid-19 if they ‘have a serious illness that requires admission to hospital’.

Charles and Camilla are both aged over 70 – the age group told to take social distancing particularly seriously.

The Government advice states: ‘We are advising those who are at increased risk of severe illness from coronavirus (Covid-19) to be particularly stringent in following social distancing measures.’

The group includes anyone aged 70 or over, regardless of any medical conditions.

Around 1.5 million in England fall into a more serious group and have been told to stay at home for 12 weeks.

This includes those who have received a donor organ, anyone on active chemotherapy or radiotherapy for cancer, some with specific cancers and people with severe chest conditions such as cystic fibrosis or severe asthma.

Charles’ health has been relatively robust. Last November, the Prince of Wales was seen with painfully swollen hands and feet during the first day of his royal tour in India, sparking concerns for his health.

As he removed his shoes to step into a Sikh temple in New Delhi, the 71-year-old’s fingers and toes were considerably red and inflamed.

But the heir to the throne dismissed any apparent discomfort, which may have been caused by the nine-hour flight to South Asia.

And in 2018, Prince Charles admitted he was no longer in the shape he once was.

As he approached his 70th birthday, the royal joked that he knows ‘only too well’ the inevitable physical decline that comes with reaching such a milestone.

‘I don’t know about you,’ he told a crowd of septuagenarians in Brisbane, Australia at the time, ‘but now bits of me keep falling off at regular intervals.’

Charles has, certainly, suffered a catalogue of injuries over the years.

When he met boxer Amir Khan in 2015, the pair compared battle wounds — and it turned out Charles had done himself more damage in his lifetime than the former world champion had suffered in the ring.

In recent years, his catalogue of injuries include a swollen eye caused by dust from a tree, to a cracked rib sustained in a tumble from a horse and a non-cancerous growth which was removed from his face in 2008.