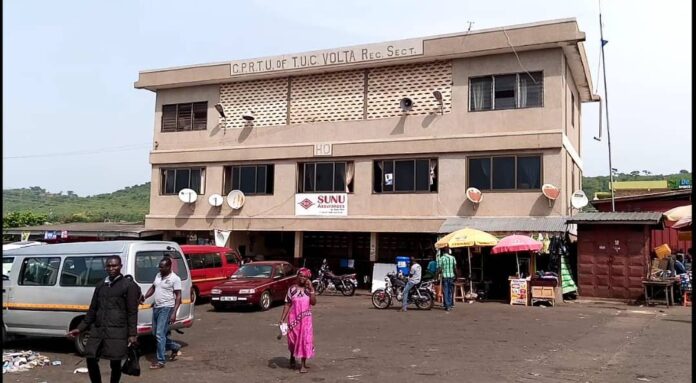 Transport business in the Volta region has greatly been affected following the shutdown of Accra and Kumasi by Presiden Akufo-Addo.

President Nana Akufo-Addo on Friday, March 27, announced a partial lockdown of the two cities including Obuasi and Tema, which took effect on Monday -in bid to curb the spread of the Covid-19 pandemic.

As a result, Transport Unions in the Volta region; including the Private Transport Owners Association (PROTOA), Ghana Private Road Transport Union (GPRTU) and the Co-operative Transport Society, have directed drivers who ply Accra and Kumasi roads to ground their vehicles until any further directive from the President.

Such drivers have also been asked to operate only within the Volta region for the two weeks period.

According to Mr. Lawrence Awilo Attitoe, the Spokesperson for the Union, the directive is to ensure total compliance with the lockdown and the protocols laid down to prevent the spread of the deadly novel coronavirus.

“We are doing this in line with the lockdown in parts of Accra and Kumasi just to ensure a total compliance; so, therefore, we have asked drivers who ply Accra and Kumasi roads to ground their vehicles or even operate just within the region within this period until any further directive from the President,” he said.

Drivers have also been asked to reduce the number of persons they pick in their vehicles to create adequate space in the vehicles.

Saloon cars are now required to pick only three passengers instead of four, while the big buses have also been asked to reduce the number of persons to just sixteen.

Mr. Attitoe said, “the move is to ensure that we create enough space in the vehicles so that even if somebody has to cough or sneeze, he or she would do it through the windows,” he noted.

But affected drivers say, the reduction in the number of persons they are supposed to pick would affect their businesses, thus called for a review of the new arrangement.

The aggrieved drivers in an interview with Starr News Faisel Abdul-Iddrisu, threatened to park their vehicles at home if they are forced to comply with the directive.