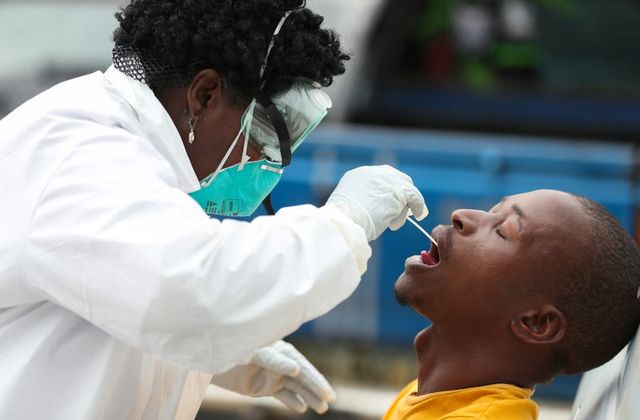 Testing plays a major role in the response to the coronavirus, as it helps us understand how far the disease has spread.

The Africa Centres for Disease Control and Prevention, which co-ordinates pandemic responses across the continent, says there is a large gap in testing rates between nations.

So which countries are succeeding in testing, and which are lagging behind?

Who is testing most and least?

Some of Africa’s smaller nations have achieved significantly better rates of testing than their larger neighbours.

Mauritius and Djibouti, for example, have both achieved high rates of testing per capita.

Ghana has also been praised for its level of testing, which its government says will help contain the spread of the virus once the lockdown is lifted.

South Africa has also pursued a relatively aggressive testing strategy and has so far managed over 200,000 tests. But this is way behind the numbers in countries like South Korea, Italy and Germany.

There are concerns that Africa’s most populous country, Nigeria, is not testing nearly enough – although the government insists it’s focusing on “clusters” of positive cases.

It’s worth adding that there are some countries on the continent where testing data is not available, such as Eritrea and Algeria.

Some don’t have testing capacity, while others for various reasons won’t give out data.

For example, President Magufuli of Tanzania has said releasing such data creates fear. His country has only released information intermittently, sometimes just giving out the numbers of people who have recovered from the virus.

What are the obstacles to more testing?

Getting hold of the chemical reagents needed to process tests can be difficult, as African countries don’t produce their own and need to compete for limited global supplies.

John Nkengasong of Africa’s Centres for Disease Control says “the collapse of global co-operation and a failure of international solidarity has shoved Africa out of the diagnostics market”.

He says African countries might have funds, but “70 countries imposing restrictions on exports of medical materials” has made it difficult to buy necessary goods.

There are also other barriers to increasing testing, including the lockdown measures to restrict movement, which can make it difficult for people to get to test sites.

However, Ngozi Erondu, an associate fellow at the Centre for Universal Health, Chatham House, says the bigger issue is the equipment.

“It is not having enough kits and reagents,” says Dr Erondu.

Nigeria’s Centre for Disease Control currently has 18 testing laboratories which can process tests that tell you if you have the disease. But it has put out an urgent plea for essential testing equipment.

Kenya has also admitted to facing challenges in getting testing kits, swabs and reagents, and its overall testing figure has fallen recently as a result.

The head of one of Kenya’s regional governments said recently that there were only 5,000 testing kits in the country, and that they were expecting 24,000 more.

There are also other social and political factors which could be barriers to greater testing.

“In some communities, there could be a stigma attached to having the coronavirus,” says Ngozi Erondu. “It’s also the case that local leaders may push back against testing if they are up for an election.”

The African Union and the Africa Centres for Disease Control have launched an initiative, the Partnership to Accelerate COVID-19 Testing (PACT), which focuses on tracking, testing and tracing.

The initiative aims to roll out about one million tests in four weeks across the whole continent.