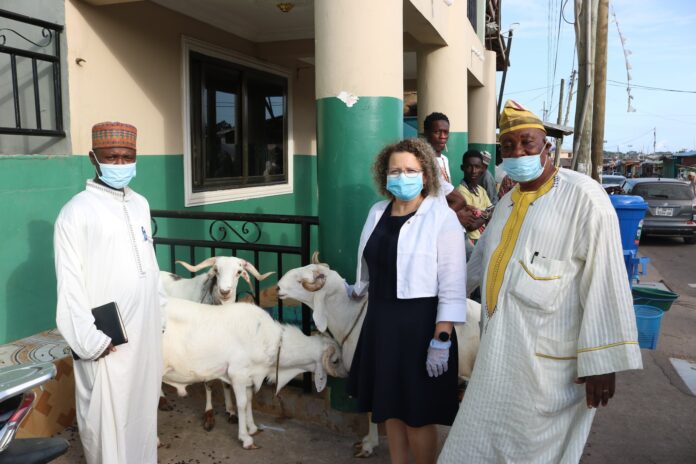 The Israeli Ambassador to Ghana Shani Cooper-Zubida has called on the National Chief Imam, His Eminence, Osmanu Nuhu Sharubutu.

The meeting was to celebrate with the Muslim Community in Ghana as they observe the Holy Month of Ramadan and prepare for Eid al Fitr. On behalf of the State of Israel in Accra, the Ambassador also donated three sheep to His Eminence to share among the vulnerable under his care.

In her interaction with His Eminence, Ambassador Cooper expressed her delight for the opportunity to meet him and fulfill the commandment of Zakkah (charity), which is one of the five pillars of Islam.

Ambassador Cooper also added that in these trying times of COVID-19, all human beings should stand by each other, without differences of religion or skin color. In return, his Eminence Osmanu Nuhu Sharubutu shared a prayer with Ambassador Cooper and welcomed her warm gesture. His eminence said the prays for peace among the world.

Israel’s Muslim population consists primarily of about 18% of the population (about 1.4 million) Sunni Arabs, who mostly live in northern Israel. Circassians and Bedouins are members of Israel’s Muslim sector.

The Temple Mount in Jerusalem, which contains the Dome of the Rock and the Al-Aqsa Mosque, is Islam’s third-holiest site. Another notable site is the El-Jazzar mosque in Acre. Israel funds more than 100 mosques and pays the salaries of their imams. In addition, Israel purchases the Korans used in mosques. The Israeli government also funds Arab schools as well as numerous Islamic schools and colleges. Arab-operated schools teach
Islamic studies and Arabic, in addition to the Israel Ministry of Education’s
general curriculum.