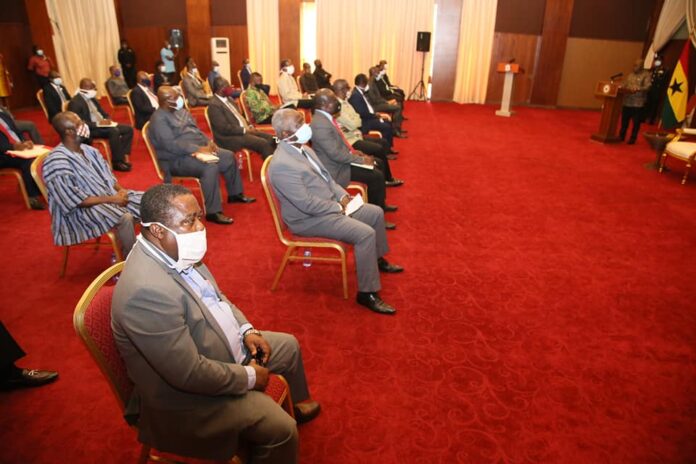 Vice-Chancellors of all public universities in the country have assured President Akufo-Addo that, contrary to some media reports, all universities will resume academic work on June 15, 2020, as ordered directed by government.

Addressing the President at the Jubilee House, when they paid a courtesy call on him, Chairman of the Vice-Chancellors of Ghana and also Vice-Chancellor of the University of Ghana, Professor Ebenezer Oduro, noted that all the universities in the country will adhere to the President’s order in absolute terms.

“You gave an order, that was a Presidential order, that Universities should reopen on the 15th of June. I think somewhere last week, some of the media carried news and I am sure probably some may have gotten to you, that some universities have defied the President’s orders and are unwilling to open. Mr. President, let le assure you that that is not the case at all. All Universities are obliging to reopen and none of us is defying your orders” Professor Ebenezer Oduro stated.

“Come the 15th, that is Monday, all universities will reopen as you have directed. We believe that the orders were given in sole contest and that tells us that we need also to apply wisdom and sole level of discretion in getting the students to campus to complete their academic work,” the Vice-Chancellor of the University of Ghana added.

President Akufo-Addo in his remarks indicated that his decision to order the reopening of schools for particularly final year students is to prevent the experiences of some Ghana students in the past who’s education were interrupted because of political decisions and in decisions.

“We know hear in Ghana, we have examples, very painful examples of what happened to generations of Ghanaians who’s educations were interrupted, sometimes by purely political events not by pandemics, but by political events and its taken a long time to for those who were the victims of this political interventions in the life of our educational system to recover and for our system to recover. If there is any way we can prevent this generation also suffering in their evolution from the pandemic, we should do so” President Akufo-Addo said.