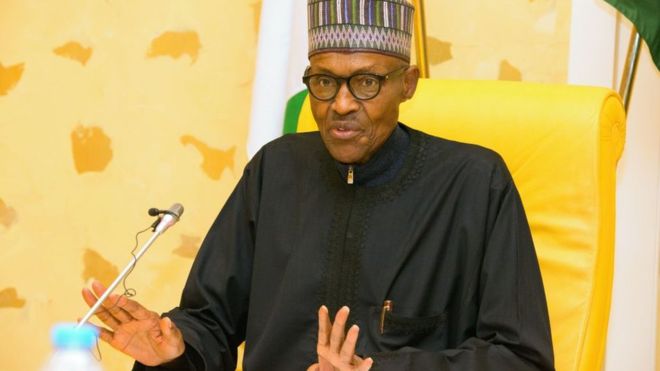 The Nigerian president has ordered an investigation after security guards reportedly shot into the air at his presidential palace.

The incident happened at Aso Rock following an altercation between one of the president’s aides and his wife’s bodyguards.

They had been arguing about the need for a presidential aide to self-isolate after returning from a trip.

Some of the First Lady’s staff have been arrested.

No casualties were reported.

The incident happened last week but came to light at the weekend when both President Muhammadu Buhari and his wife Aisha spoke about it publicly.

The BBC’s Ishaq Khalid in Abuja reports that the incident is seen as yet another sign of internal wrangling in Nigeria’s government where officials often publicly disagree.

The First Lady Aisha Buhari has spoken out about her husband before, suggesting in a 2016 BBC interview that she would not support his re-election if he did not change his cabinet. He responded by saying his wife belonged in the kitchen.

President Buhari’s spokesman Garba Shehu said in a statement that the “minor” incident happened outside the main residence and that the president was not in any form of danger “arising, either from deadly infections or the reported incident by security personnel which is currently under investigation”.

“That a minor occurrence is being used by some critics to justify attacks on the government and the person of President Muhammadu Buhari beggars belief,” Mr Shehu added.

In a series of tweets, Mrs Buhari said she wanted authorities to make sure that anyone who had been travelling across states to go into 14-day quarantine – a reference to her husband’s aide making a trip outside the capital, Abuja.

She then called upon the Inspector General of Police to release her staff “in order to avoid putting their lives in danger or exposure to Covid-19 while in their custody”.