Former President JJ Rawlings says the deployment of military men in parts of the Volta region ahead of the voter’s registration exercise is generating animosity.

In a statement, Mr. Rawlings said while it is important to protect the integrity of the registration exercise, it must be done in a fair and just manner.

“The presence of the military and other security agencies in some parts of the Volta and Oti Regions is generating animosity especially amongst innocent citizens whose basic way of life is being disrupted.

“The deployment along the borders at peacetime especially at this particular point in time has created so much suspicion and will call for a lot of intelligent flexibility and diligence,” the statement said.

It added: “Ahead of the voter registration exercise and the December elections, it is important that we demonstrate a sense of fairness and justice to all individuals and groups of people whilst maintaining the integrity and the sanctity of the process”.

Former President John Mahama has also condemned the deployment ahead of the registration exercise.

According to the NDC flagbearer, the action is part of a grand scheme to disenfranchise some Ghanaians in the upcoming polls.

The deployment of the soldiers in the Volta region particularly has created a storm on social media with many Ghanaians divided over the issue. Supporters of the ruling party have justified the move while opposition members push back with voter suppression claims.

In a statement signed by his personal aide, Mr. Mahama said “I have sufficient reason to believe that there is merit in the concerns raised by the residents of these Regions. This represents another unprecedented low in the shameless abuse of state power to attack the very citizens whose safety and security the Akufo-Addo government should be protecting. It is becoming evident by the day, that the Akufo-Addo government perceives political power as an end in itself hence the resort to such crude and high-handed measures to usurp the mandate of the people.

“To send troops into regions in times of peace for the sole purpose of preventing them from registration amounts to declaring war on them. Any President sanctioning this sort of activity stands in breach of his oath to the people of Ghana. Any President doing this, commits a grave sin against the very people he swore to protect”. 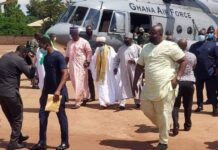 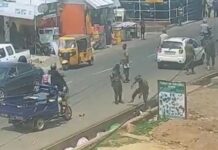