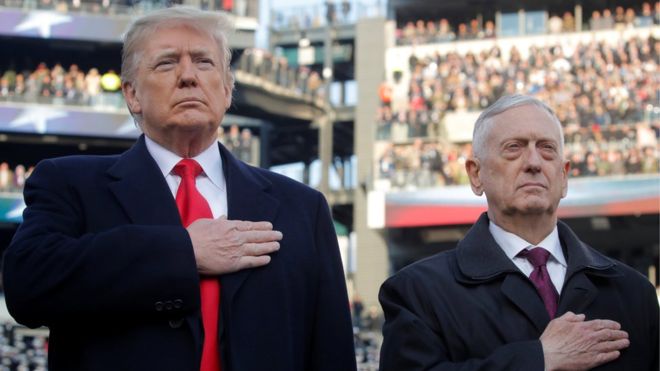 Former US Defence Secretary James Mattis has denounced President Donald Trump, accusing him of stoking division and abusing his authority.

In rare public comments, Mr Mattis said the president had sought to “divide” the American people and had failed to provide “mature leadership”.

He said he was “angry and appalled” by Mr Trump’s handling of recent unrest.

In response, the president described Mr Mattis as an “overrated general” and said he was glad he had left the post.

Mr Mattis resigned in 2018 after Mr Trump decided to withdraw US troops from Syria.

He has remained mostly silent since then, until his rebuke of the Trump administration was published in The Atlantic magazine on Wednesday.

In response to the fresh criticism, Mr Trump posted a series of tweets in which he claimed to have fired Mr Mattis.

“I didn’t like his “leadership” style or much else about him, and many others agree,” he wrote. “Glad he is gone!”

Probably the only thing Barack Obama & I have in common is that we both had the honor of firing Jim Mattis, the world’s most overrated General. I asked for his letter of resignation, & felt great about it. His nickname was “Chaos”, which I didn’t like, & changed to “Mad Dog”…

What did Mattis say?

“Donald Trump is the first president in my lifetime who does not try to unite the American people – does not even pretend to try,” Mr Mattis wrote in The Atlantic. “Instead, he tries to divide us.”

Mr Mattis also addressed the recent wave of anti-racism protests that were triggered by the death of African-American George Floyd in police custody earlier this month.

Four officers have been charged in relation to Mr Floyd’s death in Minneapolis on 25 May. The charge against Derek Chauvin was elevated to second-degree murder on Wednesday.

The vast majority of demonstrations over the past nine days have been peaceful, but some have turned violent and curfews have been imposed in a number of cities.