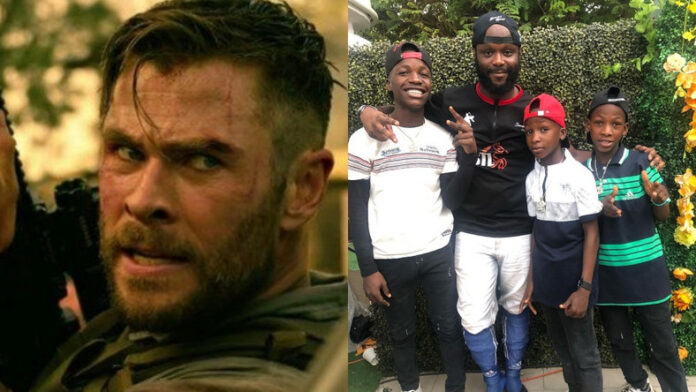 The Nigerian kids famous for remaking multimillion-dollar music videos and movie trailers with household items may be heading to Hollywood.

Members of Ikorodu Bois nabbed the opportunity Wednesday after the group shared on social media their homemade remake of the trailer for the Netflix movie, “Extraction.”

Undaunted by high-end productions, the Sanni brothers, Muiz, 15, and Malik,10 (with video-editing help from older brother, Babatunde), and their cousin, Fawas Aina, 13, filmed the trailer in their neighborhood in Ikorodu, a suburb in Lagos, using their ingenuity, the ever-present wheelbarrow, and some upcycled items,

We so much love this movie and we hope @chrishemsworth and @netflix sees this remake, pls retweet 🙏🏽 pic.twitter.com/x47h9UV9Sz

Once uploaded, they told their followers to share and tag lead actor Chris Hemsworth and Netflix to get their attention. Produced by the American duo, the Russo Brothers, “Extraction” features Hemsworth as Tyler Rake, a mercenary tasked with rescuing the teenage son of a jailed drug lord who is abducted by a rival boss.

A couple of hours later, Netflix retweeted their post, saying, “LOVE THIS.”

The video also caught the attention of Hemsworth, who retweeted the video, commenting, “EPIC.”

But what really got their attention was the unexpected recognition from movie producers, the Russo Brothers, who shared the video and invited them to the premiere of “Extraction 2.” In May, Joe Russo told Deadline that they had secured the deal to write a sequel.

“This is awesome! We would love to have you guys at the #Extraction 2 premiere…DM us and we’ll get you there!” they said in a tweet.

This is awesome! We would love to have you guys at the #Extraction 2 premiere…DM us and we’ll get you there! https://t.co/6eufmJMgT7

The boys reacted with elation, saying the comments from the producers and Hemsworth were a dream come true.

“This is the day we’ve been waiting for all our lives,” they said in a tweet reply to the invitation.

Babatunde Sanni, the 23-year-old who’s the brain behind the group but doesn’t appear in the video, said the trailer had taken them a month to make.
“Some days we shoot but end up re-shooting just because we wanted to do our best,” Babatunde Sanni told CNN.

While the invitation marks a significant development for the kid sensations, it’s not the first time their innovative videos have garnered notice.

Since creating their Instagram page in 2017, they have amassed more than 600,000 followers. Some of their content has gone viral, and they’ve collected kudos from big stars including actor Will Smith, Netflix “Money Heist” actor Alvaro Monte and rapper Roddy Rich.

Babatunde Sanni told CNN it was rewarding to see all their hard work pay off.

“We are so happy people are getting to know us globally,” he said.