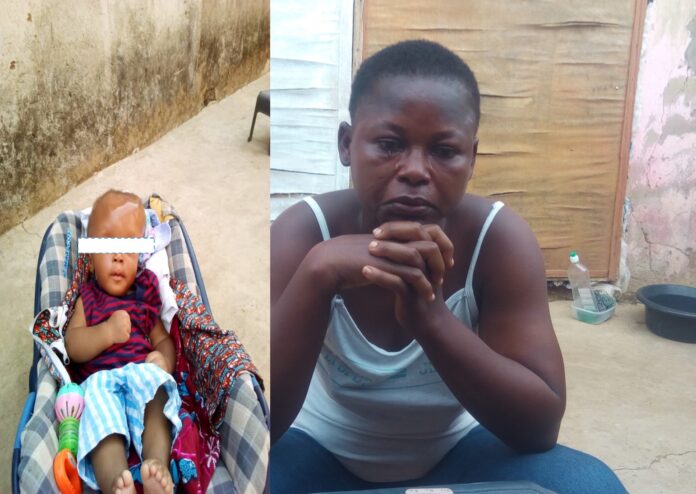 A helpless mother in the Upper East Region is weeping over an alleged mishandling she believes somewhat led to her baby boy being deformed inside the theatre of the region’s leading hospital.

Gladys Ataabo told Starr News at her Pomolgo-Sirigu home in the Kassena-Nankana West District that a doctor looked unhappy as he led her into the surgical theatre whilst in prolonged labour at the Upper East Regional Hospital. She said after the caesarean section had been performed, it was discovered that about a half of the placenta was left behind inside the uterus and the baby came out with a clubfoot— a foot twisted out of shape. The poor mother would go for a loan later and spend thousands of Ghana cedis in an attempt to save the newborn.

“I was admitted to the labour ward on the 25th of June, 2019. I was there with pain, which was so severe I requested a caesarean section. The doctors told me I could deliver on my own. I was on the ward until the following day when I started urinating blood. The doctors said it was normal to urinate blood and asked me to wait, still assuring me that I could give birth on my own. I had a severe pain and a sleepless night. I was given a painkiller; it didn’t work.

“The following day, I told a doctor that I was not feeling the foetal heartbeat again. He told me to pick stones and be counting the number of the heartbeats of the child in my womb. I picked stones but could count only three, which is not even normal. He told me to continue till the following day. I did. He came back and told me they had to discharge me home so that I would go and continue counting the foetal heartbeat and come back on the 12th of July for review,” Gladys, who herself is a health worker, said in a Starr News interview.

Continuing, she said she went back to Pomolgo-Sirigu but had just one restful night. The pain, according to her, became so much more severe she had to return to the same hospital without delay.

“I went back on 1st July. I got there around 7:00am. I was on the bed crying, telling them if they could do me surgery. They said no. Around 4:30pm, a doctor came saying he was closing for the day. I jumped from the bed and pleaded that I would not survive if they didn’t do me caesarean section that day. He wasn’t happy. They took me to the theatre. I realised that they removed the child. About 30 minutes later, I asked whether my child was alive. I heard a nurse saying, ‘Yes, Madam, it’s alive.’ She brought the child to me, saying my child had a condition called spina bifida (incomplete closing of the spine) and clubfoot.

“Then, she drew the doctor’s attention to the placenta, saying it was half. They had to open the sutures again and removed the rest of the placenta. They took me to the ward. I didn’t see the child again until the following day when they told me they had to refer the child to Komfo Anokye or Korle-Bu for a doctor to work on the spina bifida. Some of the conditions the baby is having today is due to the delay on the part of those who handled the delivery. The neck is not stable. The delay in doing the surgery, as some doctors revealed to me later, caused too much stress to the child and its leg had to turn as the child was struggling, resulting in the clubfoot,” she stated.

She cries for help

According to the woman, whilst her baby was being monitored at the hospital’s Neonatal Intensive Care Unit (NICU), it was also diagnosed with hydrocephalus— a buildup of fluid in the skull that causes the brain to swell.

The journey continued in August to the Komfo Anokye Teaching Hospital (KATH) in the Ashanti regional capital, Kumasi, where a heart-related problem, which doctors at the Upper East Regional Hospital suspected the baby might have, was pronounced nonexistent after a heart test. The test cost the woman Gh¢400. The following month, she spent Gh¢3,000 at the Tamale Teaching Hospital (TTH) in the Northern Region to have the spina bifida corrected.

“They worked on the spina bifida on the 9th of September. Then, on the 20th of September, they discharged us. We came back home and, then, I started realising that the head was becoming big. I told them about it when we went back for review. They said the CT scan in Tamale was down and I had to go to Komfo Anokye in Kumasi to do the CT scan and come so that they would see if it was actually hydrocephalus,” she said.

It cost Gh¢700 to have the CT scan, or computed tomography scan, done at the KATH in November, according to her. In the first week of December, a surgery was done on the hydrocephalus at the TTH with a loan of Gh¢5,300 she had to source for the baby’s sake.

“We did the surgery on the 9th of December. We were in the ward. But we were not seeing any improvement. The head pressure was still there, temperature was still high and vomiting was still coming. They were monitoring us till the 9th of January when doctors told us that they had to take the child back to the theatre. They took him, opened and said there was a blockage which they flushed. Truly, it was draining. They discharged us on the 20th of January.

“On the 23rd of January, the child developed fever again. Then, vomiting came in. I took him to the Martyrs of Uganda Health Centre here in Sirigu. They did laboratory tests. There was no malaria. I went round begging for money to go back with the child to the Tamale Teaching Hospital. I went back on the 31st of January. We were admitted again. The pressure on the head, fever and vomiting were back. The head circumference was increasing again. He used to laugh. There was no smiling, no crying again. Even when you pinched him, he wouldn’t cry. He doesn’t sleep anymore. To date, I don’t sleep, too,” she said as she wept.

The revisit to the TTH did not yield the desired result despite all the efforts made by doctors from January to March this year. She is back at Pomolgo-Sirigu with the child, administering only antibiotics “on doctors’ instructions” and keeping a soaked towel on the baby’s head to no avail.

“And the costs of the drugs— they are expensive. So, I find it difficult to go back to Tamale for review. One of the drugs alone is Gh¢80 and three of it is needed a day— that is Gh¢240 a day for that drug alone. I’m going through a serious emotional distress. At times, I cry alone in my room with the child.

“I’m not a nurse. I work with nurses. Some of my own colleague health workers did not show support. They refused to give the child medications, they refused to feed him whilst we were on the ward at the Tamale Teaching Hospital. They didn’t treat the child well. A surgery still has to be done for the child to survive. I’ve spent all I had. I don’t know where to turn to borrow again,” she sobbed at Pomolgo-Sirigu as she begged the public to help save her child.

When contacted on the alleged mishandling at the theatre, the Administrator of the Upper East Regional Hospital, Zakariah Yakubu, told Starr News the hospital’s management would investigate the case and provide a response.