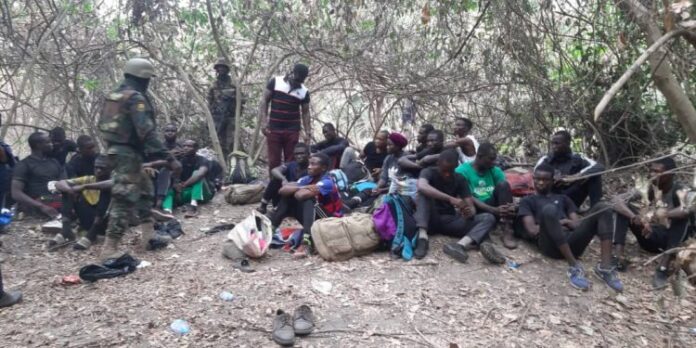 The Circuit Court in Accra presided over by Her Honour Ellen Offei Aryeh has granted bail in the sum of GHc100, 000 to the alleged secessionist recruits of the Western Togoland Organization.

Anthony Dormekpo, a driver by profession is the only one of the 21 persons earlier arraigned left to be prosecuted.

In court on Tuesday, Dormekpo who has been in custody since his arrest earlier this year was admitted to bail and as part of the bail sum is to produce four sureties.

One of the sureties, the court said should earn not less than GHc3,000 a month.

This was after his lawyer George Asamani had filed an application on notice for bail pending trial.

The Attorney General’s Department also filed an affidavit in opposition to the bail.

But the court presided by Ellen Ofei Ayeh after considering both applications granted Dormekpo bail while the matter has been adjourned to July 10.

The same offence was levelled against all the suspects earlier but has pleaded not guilty to all charges.

Earlier this year, the court discharged 20 out of the 21 alleged secessionists recruits of the Western Togoland Organization.

The discharge was after the prosecution had told the court that they have no evidence to buttress the charges levelled against the suspects.

Chief Inspector Simon Appiosornu had told the court that the then suspects were only victims of circumstances after investigations revealed that they paid monies between GHc400 and GHc800 under the guise of getting recruited into the Ghana Armed Forces.

Prosecuting, Chief Inspector Simon Apioursonu told the court that the accused person a resident of Akatsi in the Volta Region is the one who accommodated some of the recruits while others were transported to Dzodze where the Western Togoland had its training camp.

They were all arrested in a military swoop at Dzodze in the Ketu Municipality of the Volta Region after intelligence was gathered.