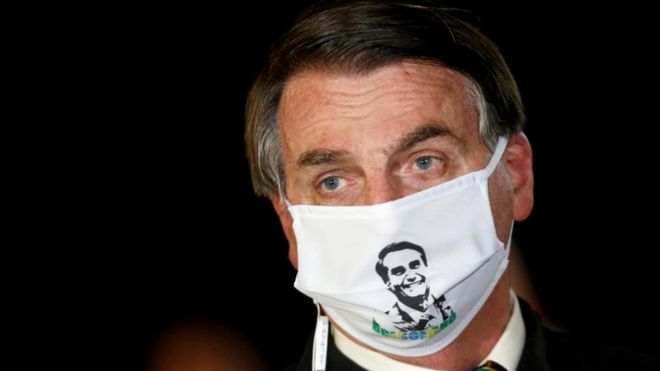 He took the test, his fourth, on Monday after developing symptoms, including a high temperature.

Mr Bolsonaro has repeatedly played down the risks posed by the virus, calling it “a little flu” and saying that he would not be seriously affected by it.

He has also urged regional governors to ease lockdowns, which he says hurt the economy, and on Monday he watered down regulations on wearing face masks.

Back in April, he said that even if he were to be infected with the virus, he would “not have to worry as I wouldn’t feel anything, at most it would be like a little flue or a little cold”.

When he made the remark, the number of Covid-19-related deaths was still under 3,000 and the number of infections was around 40,000.

Despite the rising numbers, President Bolsonaro has argued that regional lockdowns are having a more damaging effect than the virus itself, and accused the media of spreading panic and paranoia.

On Monday, he made further changes to a law which would require Brazilians to wear masks in public.

He has attended a number of public events without a mask, even when local rules required him to wear one.

On Sunday, Foreign Minister Ernesto Araújo posted a photo on social media showing himself with President Bolsonaro and others attending an Independence Day celebration at the US embassy in Brasilia.

None of those in the photo is wearing a mask or observing social distancing.