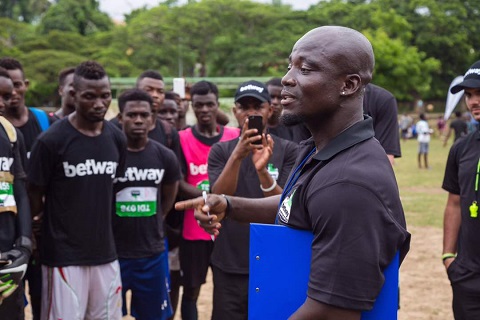 There are several former national stars who are struggling to put body and soul together after leaving the sport.

Stephen Appiah who is the brand ambassador of Betway has played a huge role in bringing some of these former players to benefit from an empowerment project dubbed the Betway 12th man programme which seeks to help these stars.

The former Black Stars captain is urging some of the ex national players who are doing well in life to lend a helping hand to the others who are struggling.

“I think it’s time for us to help each other because we meet, we talk and you can see that some of us we have huge problems”

“We have problems in which some of the ex players even how to approach, you know we have that stigma that he was a top player but now he is not doing anything so to approach people it’s very difficult because you go and ask somebody for something and then they go and translate it in a different way.”

“So as Betway brand ambassador I was approached by the officials of the company, I told them we have former national players who are not doing anything so we have to think about them and do something for them so that’s how come they are being supported by Betway to at least shape their lives after leaving the sport”

“I believe that if we can try and help each other in times of difficulties, it will go a long way to make the society and country at large a better and good place for all of us to live in, “Appiah told Starr Sports.