The Member of Parliament for Ejura Sekyere-Dumase in the Ashanti region Bawa Braimah says the Police and the Military dispatched to the area have taken sides in the chaos that has engulfed the constituency since the voter registration exercise began.

According to the lawmaker, personnel of the security agencies show open bias and protect the ruling party members even when they attack opponents.

The claim comes on the back of the killing of a 28-year-old man by some men believed to be supporters of the ruling New Patriotic Party after a scuffle at a registration centre at Banda in Bono region.

The scuffle was sparked after some persons associated with the NPP parliamentary candidate for the constituency confronted brother of the MP for the area.

Speaking to Morning Starr Wednesday, the legislator said residents of the constituency have lost confidence in the security officials.

“Those who attacked me personally days ago are still walking around, they are well known NPP people, I have given their names to the police but up till now, nothing has happened. And the Police know, many of the residents here have lost confidence in the military and the police because even though they are to protect us, they are only protecting the NPP candidate and his team,” he told Sit-in host Lantam Papanko.

Meanwhile, Security expert and Head of the Department of Research at the Kofi Annan International Peacekeeping Training Centre (KAIPTC) in Accra, Professor Kwesi Aning has blamed the chaos on activities of vigilante groups.

“It is naïve for anyone to think what is happening is a surprise. Members of vigilantes have now recognized the power that they have and are now using their power to intimidate those who formed them. They now know they are an alternative source of power and so they are using it.

” What should be done is that immediately we need to go back to the drawing board and find measures to really deal with the menace and there is the need to be practical and realistic with the solution and approach,” he said.

Since the commencement of the voter’s registration exercise, there have been reports of violence in centres especially in Accra and the Ashanti region. 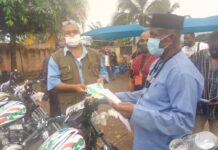