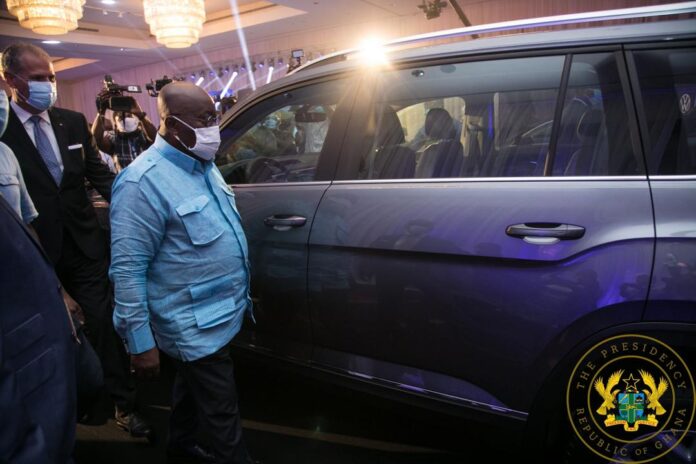 President Akufo-Addo has unveiled the first Volkswagen vehicle to be assembled in Ghana, following the establishment of the VW assembly plant in Ghana.

At the unveiling ceremony, held at the Kempinski Hotel, on Monday, 3rd August 2020, President Akufo-Addo expressed his delight at the decision taken by Volkswagen “to assemble a number of its brands right here in Ghana, not only for domestic use, but also for the West African market.”

It will be recalled that on Thursday, 30th August 2018, at the invitation of the President, the German Chancellor, Angela Merkel, paid a brief visit to Ghana, where an agreement was reached between Government, Volkswagen and its Ghanaian partner for the assembly, and, ultimately, the production of VW vehicles in the country.

According to President Akufo-Addo, there were many who expressed doubts about the feasibility of such an assembly plant being established in Ghana; and there were those who, for narrow, partisan considerations, described this announcement as nothing but a hoax, which would never see the light of day.

“Two years on, we have confounded the doubting Thomases, and I am happy to be here this morning to launch, officially, the first Volkswagen vehicle that has been assembled in our country. It is a good day for Mother Ghana,” he added.

VW’s presence in Ghana, President Akufo-Addo noted, has been facilitated by Government’s bold move to develop the Ghana Automotive Development Policy, under the auspices of the Ministry of Trade and Industry, with generous fiscal incentives.

“It is gratifying to note that VW is going beyond the ‘Beetle’ to assemble in Ghana other brands, namely Tiguan, Teramont, Amarok, Caddy, Polo and Passat. Volkswagen means ‘The People’s Car’, so I am expectant that the brands being assembled in Ghana will not only be affordable, but also be of the highest quality,” he added.

The President assured Volkswagen Ghana that Government will continue to support the company in diverse ways to ensure the sustainability and profitability of this venture in Ghana.

To this end, he indicated that the Chief of Staff at the Office of the President, Hon. Akosua Frema Osei-Opare has issued, recently, a new directive to all Ministries, Departments and Agencies, and, indeed, to the Public Procurement Authority, to give first preference to the acquisition of locally assembled vehicles, when public funds are used to buy vehicles.

“Additionally, the Minister for Finance, in his excellent Mid-Year Budget Review Statement to Parliament, indicated that Government is going to establish an Automobile Industry Development Support Centre, which will, amongst others, co-ordinate the technical processes for licensing domestic vehicle assemblers and manufacturers, and monitor, also, their compliance with industry regulations and standards,” he said.

He continued, “The Centre will also co-ordinate the implementation of an essential element of a viable automotive sector, that is the establishment of a Vehicle Financing Scheme, which will link financial institutions to individuals and groups interested in purchasing newly-assembled vehicles in Ghana. Furthermore, the Centre will carry out an Automotive Skills Enhancement Programme to provide requisite skills for the various categories of the value chain of the automobile industry.”

With the Chinese company, Sinotruk, already engaged in the assembly of trucks in Ghana, the President was hopeful that other global automobile companies, which have indicated their preparedness to set-up shop in Ghana, will soon follow the remarkable, pioneering example of Volkswagen.

In developing the new automobile industry in Ghana, President Akufo-Addo reiterated the commitment of Government not to destroy the livelihoods of local stakeholders engaged in the industry value chain. 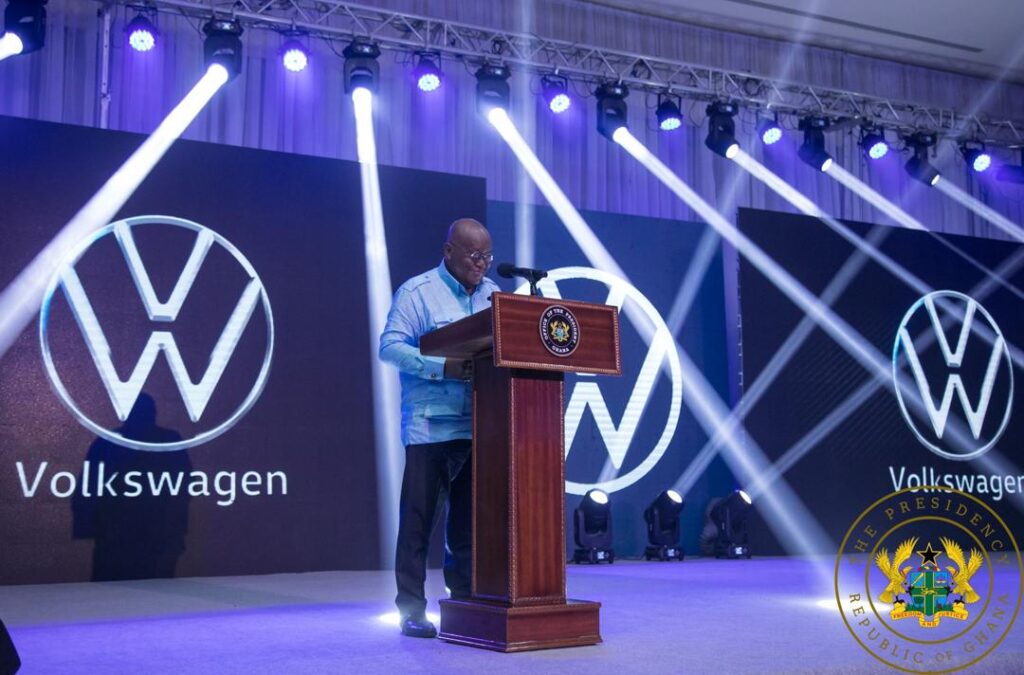 “I have engaged with representatives of the various stakeholder groupings, and given them the assurance that Government will introduce the necessary policy safeguards to protect their interests, and enable them, also, over time, to adapt to the new realities of the emerging automotive sector,” he said.

Additionally, Government, the President said, will continue to introduce appropriate incentives and support interventions to attract both foreign and local investments into the automotive assembly and manufacturing sector in Ghana.

“It is worth noting that, already, a Ghanaian owned company, the Kantanka Group, is in possession of a license to undertake auto-assembly operations in Ghana. I believe the development and modernisation of the industry present a “win-win” opportunity for both foreign and local companies engaged in the industry value chain,” he said.