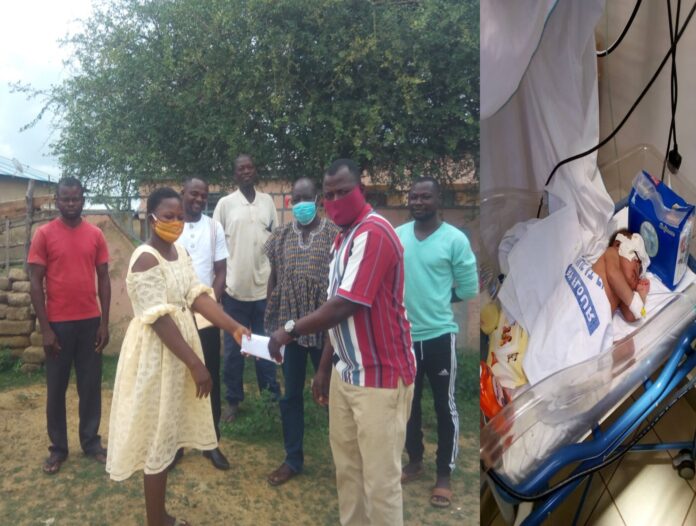 A Starr News story highlighting the silent grief of a helpless mother and a deformed little child in the Upper East Region has attracted not just a sympathy cash of Gh¢3,000 donated by the United Kassena Nankana East (UkaNaEast) to keep the boy alive but something more than the support.

The cash, contributed by members of the multi-community union, is a fraction of the amount that is desperately needed to save him through surgery.

The mother, Gladys Ataabo, was delivered in 2019 through a caesarean section at the Upper East Regional Hospital where she says she was mishandled by a doctor who looked unhappy whilst leading her in prolonged labour to the theatre. She says she also heard a nurse telling a doctor inside the surgical theatre, after the operation had been done, that about a half of the placenta was left behind in her uterus. Her belly, she says, was cut open again for the rest of the placenta to be removed.

Whilst the recovering mother was lying in the theatre bed, the newborn was presented to her with a clubfoot (a foot twisted out of shape) and a condition called spina bifida (incomplete closing of the spine). And shortly afterwards, the baby was admitted to a Neonatal Intensive Care Unit (NICU). There it developed hydrocephalus— a buildup of fluid in the skull that causes the brain to swell.

The hospital’s administration rejected all her claims in a rejoinder, following the Starr News report, but doctors elsewhere said the mishandling at the facility was condemnable if it was true, and remarked that the defects the baby later developed usually should have been detected at the antenatal stage and could have been prevented before the caesarean delivery. One doctor even said the expectant mother could have died in labour had she not pressed the hospital for an immediate surgical intervention when the burden became more than she could bear.

After the baby was discharged from the NICU, the mother spent Gh¢3,000 at the Tamale Teaching Hospital (TTH) to have the spina bifida corrected and a surgery was done on the hydrocephalus at the same facility with some Gh¢5,300 she borrowed with sorrow. She also visited the Komfo Anokye Teaching Hospital (KATH) with the baby twice— in August and in November, 2019— for a heart test and a computed tomography (CT) scan.

Even with all the back and forth and all the money spent so far, Gladys is not glad as the child, who has undergone three surgeries on the head, still looks far from fine. She says the child no longer sleeps as the increasing pressure on his head causes his body temperature to rise.

“To date, I don’t sleep, either. I normally soak a towel in water and place it on his head. At times, I cry alone in my room with the child,” she told Starr News in June, 2020, as her eyes dripped with tears.

A fourth surgery, she trusts, will put the boy’s growth on a normal footing as doctors at the TTH have joined calls on the public to financially assist her and the baby.

UkaNaEast is a league of members of seven communities in the Kassena-Nankana East area of the Upper East Region.

The communities include Kandiga, Manyoro, Mirigu, Nabango, Natugnia, Sirigu and Yua. That part of the region is home to a ‘galaxy’ of accomplished figures and internationally known intelligentsia.

Prof. Gordon A. Awandare, Director of the West African Centre for Cell Biology of Infectious Pathogens (WACCBIP) and former Dean of the Biochemistry Department of the University of Ghana, hails from the same zone as do these notable individuals, too— Godwin Adagwine, law lecturer at the University of Professional Studies (UPSA); Clara Beeri Kaser-Tee, law lecturer at the Ghana Institute of Management and Public Administration (GIMPA) and Managing Partner of the Kaser-Tee Law Firm; Jacob Atule Adongo, former Deputy National Coordinator of the National Youth Employment Programme (NYEP), now the Youth Employment Agency (YEA); and Dr. Lawrence Kannae, Vice Chairman of the Public Services Commission of Ghana.

Whilst making the donation at Sirigu, where the poor family of the ailing child belongs and resides, the UkaNaEast leaders registered the union’s discontent about the experience Gladys reportedly had as she sought healthcare services at the said hospital.

“Reliable information we have indicates that the hospital service could not detect the deformity earlier. We are further informed that it was realised after the operation that the placenta was not completely removed. This calls for the removal of the first stitches and further causing pain to the lady. We must state that we are very much disappointed with these two developments.

“However, we believe that the life of the little child matters most to us and, therefore, mobilised our members to source financial assistance for the medical needs of the child. We particularly thank our members for the generous contributions made towards the support of this child. We further appeal to other benevolent organisations and individuals to come to the aid of the child. These donations can be channeled through the union or otherwise for onward presentation,” the union said in a press statement read at the donation ceremony by its Public Relations Officer, Prosper Akulia.

After receiving the cash, a thankful Gladys indicated she would proceed at once to the Upper East Regional Hospital for a referral note to the TTH. She is hopeful that the long-overdue surgery can start immediately in the Northern regional capital with the little she has got from UkaNaEast whilst praying to receive more helping hand so she can settle the rest of the hospital bills.

The union has planted across its area thousands of seedlings handed out for free by Form Ghana, a reforestation and plantation company based in the southern part of Ghana.

“Our brothers outside the region, even abroad, are part of this union. As part of our activities, we are into tree planting. We just finished distributing the third consignment of trees— that is mahogany. We are distributing the trees through the assembly members in the 24 electoral areas within our catchment area.

“When they (the trees) survive, we all know the importance of trees in our environment. UkaNaEast is out basically to see how we can solve our own problems,” the union’s Organiser, Aboziah Augustine Aboya, told journalists at the donation ceremony.

He also spoke of some steps the union was taking to reestablish young people who had dropped out of school in the area and to rededicate itself to bringing the attention of authorities to roads he said were in a dreadful state in the area.

“We have had a number of demonstrations and press conferences. The road linking from Kandiga Junction to Sirigu here, to Yua, Natugnia, Manyoro, is very bad. As of now, the bridge entering Sirigu from Kandiga is broken. Without roads, the cost of living would become very high because goods and services cannot come as they are supposed to flow. We don’t even have any proper dam for the whole of the seven communities that we mentioned,” said the organiser with a rekindled passion in front of newsmen as Gladys, a health worker, looked set to use that same deplorable road together with her baby to the regional hospital to pick up the required referral letter for the recommended surgery.