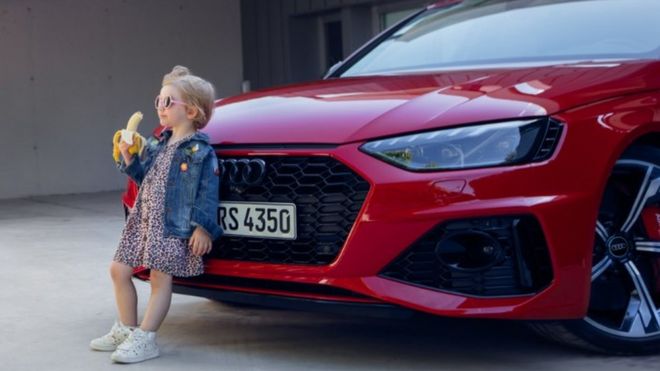 German carmaker Audi has apologised for an ad showing a little girl eating a banana in front of a high-performance car, which drew a torrent of criticism on Twitter.

“We hear you and let’s get this straight: We care for children,” Audi tweeted in its apology.

“We sincerely apologize for this insensitive image and ensure that it will not be used in future.”

Critics said the child’s pose was “provocative” and life-threatening.

Some pointed out that the driver would not be able to see the child in that pose, leaning on the grille.

Others said the image was sexually suggestive, as bananas and sports cars have often been seen as symbols of male lust.

Audi’s slogan in English above the image reads: “Lets your heart beat faster – in every aspect.”

The firm says it is now investigating how the ad came to be published.

In May the German car giant Volkswagen, owner of Audi, became embroiled in a similar social media row. Its ad showed a dark-skinned man being manoeuvred around by a pair of white women’s hands, before being flicked away from a yellow VW Golf to a jaunty soundtrack.

The full ad for the Audi RS 4 on the firm’s website shows it being marketed as a family car – and that was apparently the context for the controversial Twitter ad featuring the little girl eating a banana.

Jane Bradford tweeted under the Audi apology: “So, let your heart beat faster in every aspect? Picture of – child with banana in mouth and flash car- so wrong in EVERY aspect”.

And DjBeeTee tweeted: “Let’s add it up: Red=eroticism, sports car=substitute for potency, animal print mini-skirt=sex appeal, banana=phallic symbol. But sure this is all just accidental…”

However, Mark Kreuzer, an engineer and blogger, tweeted: “Hmm, well for me the message is: Audi RS4 = family car. Just as your own daughter makes your heart beat faster, so does the RS4. And both are of course cool.”