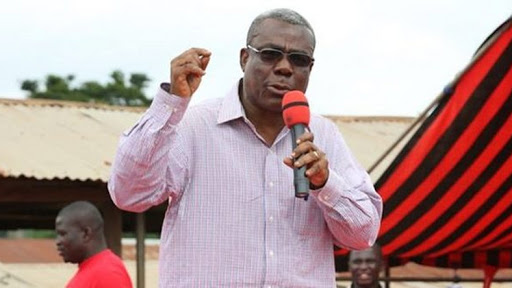 The growing perception of a plot between the ruling New Patriotic Party (NPP) and the Jean Mensah-led Electoral Commission has been confirmed by the NPP’s campaign team chairman, Peter Mac Manu who was reported on Starrfm.com.gh as claiming the NPP will beat the NDC by 1.5million votes.

There is ample evidence why this dangerous claim cannot be wished away as mere political rhetoric. It came from the campaign manager of the ruling party that pushed for the new voters registration exercise despite covid-19 threats to our national life.

Being able to certainly quote the margin by which the ruling party will win an election reveals a grand agenda to fix the December, 2020 polls. The NPP has never hidden its attempts to manipulate the process to their advantage.

Their insistence and support for the unnecessary compilation of a new voter roll has buttressed their determination to disenfranchise non-Akan constituents who support the opposition. Therefore in the opposition strongholds, the state deployed security forces to harass and intimidate citizens in order to reduce voter turnout in the Volta and parts of the Bono regions particularly.

A young graduate was killed by NPP thugs in Banda simply because he was suspected to be an NDC supporter. Then the same forces were let loose in Banda to prevent Ewes in that area from registering while NPP imported Ivorians to register.

After the elections, the EC clandestinely announced it was going to delete duplicate names, foreigners and minors from the register. This is another avenue to delete voters’ names from the register in NDC strongholds in order to achieve the 1.5million vote margin. When resistance built against the need to replace the old voters register, the EC claimed it had a superior biometric system that will prevent multiple registrations and even use facial recognition technology. It came as a surprise when the EC turned around to say there were multiple registrations.

Similarly, the position that minors found their names on the register is abominable. It is an avoidable phenomenon if it is true at all. The EC used Ghana Card to register voters as well as vouching by community members. Jean Mensah and her deputy, Bossman Asare should have been aware that nobody would be able to determine the real age of anyone he or she vouches for. That was the reason their reckless rejection of birth certificates for the exercise is a grave mistake legalized by the Supreme Court packed by Akuffo Addo.

The attempt to remove suspected minors will be arbitrary and baseless, obviously targeted at NDC strongholds.

For foreigners to be on the roll is beating imaginations considering the warlike deployment of security forces to our borders in the Volta Region and the northern borders as well as parts of the Western Region. How foreigners outmanoeuvred soldiers and policemen to register is only known to the NPP and Jean Mensah. The NPP already believes that the Ewes are not Ghanaians and wants them removed from the voters register. This foreigner cleaning exercise by the EC is therefore a move to disenfranchise Ewes who registered in non-Ewe areas in Banda, Ashanti, Akim areas, the Fante land among others all with the objective of creating an artificial voter support margin between the NDC and the NPP even before actual votes in December.

We are all witnesses to the manner in which Jean Mensah was brought into the EC and how arrogantly belligerent she is particularly towards the NDC. Her deputy also appointed by Akuffo Addo, Eric Bossman Asare is on record to have said that the opposition NDC is a threat to Ghana’s democracy. These two NPP agents are clearly planted in the Electoral Commission for “Agenda 1.5million Gap Project” at all cost. I believe Mac Manu was therefore not speaking from a vacuum; he was speaking what was planned with and being executed by the EC.

The real threat to Ghana’s democracy are the duo planted at the Electoral Commission, the NPP and Peter Mac Manu. Just as Jake Obetsebi Lamptey did in 2004 when NPP saw defeat coming their way and declared the presidential election results in their own favour in a garden, Mac Manu has declared the margin by which the NPP wants Jean Mensah to declare the results in favour of Akufo-Addo whether Ghanaians give victory to John Mahama or not.

However, this time as declared by John Mahama, they will be matched boot for boot. No manipulation by the EC or NPP will be left to take effect. 2020 is a year of Ghana’s destiny, it must be jealously guarded!