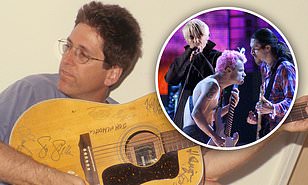 Jack Sherman, the guitarist who appeared on the debut album of American rock band Red Hot Chili Peppers, has died at the age of 64.

“He was a unique dude and we thank him for all times good, bad and in between. Peace on the boogie platform,” a tweet on the group’s official account reads.

Sherman, who joined the band on their first US tour in 1984, also co-wrote songs for their second album.

The cause of his death has not yet been disclosed.

“We of the RHCP family would like to wish Jack Sherman smooth sailing into the worlds beyond, for he has passed,” the band wrote on social media.

Sherman replaced Hillel Slovak, guitarist and founding member of the Red Hot Chili Peppers, in December 1983. Slovak returned to the band in 1985.

However, Sherman went on to contribute to the group’s future albums The Abbey Road EP and Mother’s Milk, as well as working with other prominent artists including Bob Dylan and George Clinton.

Sherman was not included when other Red Hot Chili Peppers band members were inducted into the Rock and Roll Hall of Fame in 2012. He later criticised the decision, telling Billboard magazine that he had asked to be included and felt “dishonoured”.

“It’s really painful to see all this celebrating going on and be excluded,” he said.