President Akufo-Addo has appealed to the Ghana Education Service to reconsider the decision to ban some 14 students from writing the ongoing WASSCE following their involvement in the recent chaos in their schools.

In a statement Sunday, the President directed the Education Minister to intervene in order to ensure that the students are made to write the exams. The statement, however, noted the dismissal and other punishment meted to them must stand. 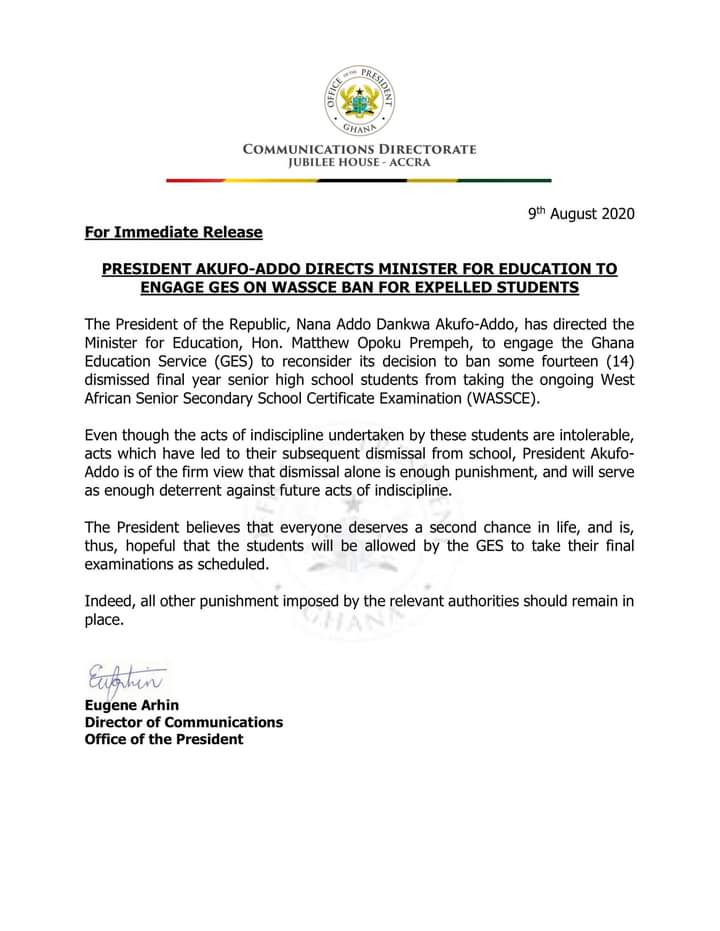 The Ghana Education Service (GES) announced the dismissal of 14 final year students who are believed to have caused chaos and destroyed properties in their respective schools in the wake of the ongoing West African Senior School Certificate Examination (WASSCE).

The GES in a statement said the action is to serve as deterrent for other students who are still partaking in the exams.

WAEC in a statement also noted it will not hesitate to sanction students and teachers of the school if they are found culpable in the rioting at their premises. Final year students of the school who are writing their exams on Thursday attacked an invigilator and a reporter over claims that supervision was strict during the exams. They were reportedly instigated by the proprietor of the school.

“The Council strongly condemns the behavior of the proprietor and candidates of Bright SHS as reported and wishes to caution that such unruly behaviour contravenes Section 8 (1) of the WAEC Act, 2006 (Act 719) which frowns on and sanctions acts of assault on examination officials.

“In order to ensure the integrity of the examination and safeguard the lives of examination officials (Supervisors, Invigilators and WAEC Officers) assigned to the centre, the Council has decided to, in the interim, relocate the centre from Bright Senior High School to Ofori Panin Senior High School effective Saturday, 8th August, 2020,” WAEC said in a statement Friday.

Meanwhile, the Proprietor of the school located at Akyem Kukurantumi has been arrested.

He was arrested Friday Morning by CID officials from the Eastern Regional Police Headquarters accompanied by the Akyem Tafo District Police Commander.

None of the students has, however, been arrested.

Meanwhile, a woman from the Ghana Education Service identified as Mama Adwoa who was slapped and her phone smashed by the rioting students had her phone replaced by the school authority.

The Headmaster of Bright SHS on Thursday incited students numbering about 1000 to attack WAEC external invigilators for not compromising for his students to cheat.