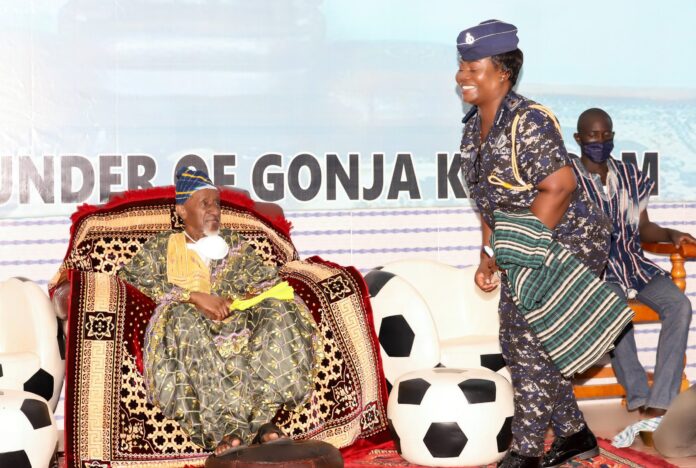 The overlord of the Gonja Traditional Area, Yagbonwura Tuntumba Boressa I has conferred a chieftaincy title on the Director-General of Police Welfare COP Maame Yaa Tiwaa Addo-Danquah.

COP Maame Yaa Tiwaa who has oversight responsibility of the Savannah Region, was recognized by the King for constantly keeping touch with the area to ensure that policing was done professionally in line with the vision of the Inspector General of Police Mr James Oppong-Boanuh.

The Yagbonwura revealed that by the conferment, she has become a native of the area and should see Gonjaland as her second home, while urging her to continue to support the area in the maintenance of peace.

“COP Maame Yaa Tiwaa was at this palace and we conferred on her a chieftaincy title which implies she is now one of us. We implore here to continue to support the maintenance of law and order in Gonjaland”, Linguist of the Yagbonwura revealed during a courtesy call by the IGP.

It would be recalled that earlier this year, a chieftaincy title was conferred on her by the chiefs and people of Aflao in the Volta Region, according to the Paramount Chief of Aflao, Fiator Hukportie VIII at the Perez Dome in Accra on Sunday January 26, 2020.

The Paramount Chief who is a serving officer, revealed that it is in recognition of her contributions to the Aflao Traditional Area, commending her for her selfless efforts in promoting the area.

Explaining the rationale behind the chieftaincy title of the immediate past Director General of the Police Criminal Investigation Department (CID), he noted among other things her magnanimity and generosity to humanity.