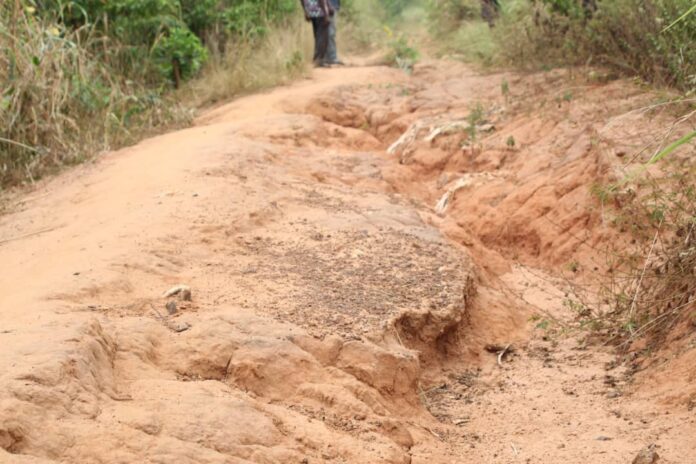 The Deputy Eastern Regional Minister Samuel Nuertey Ayertey has incurred the wrath of Chiefs in Oborpa and its surrounding communities in the Lower Manya Krobo Municipality for allegedly insulting them for kicking against the grading of a major road linking the Communities but in deplorable conditions.

The Chiefs stopped a grader brought on the road by the Deputy Minister to fix the deplorable Oborpa to Klo Gyerkity road arguing that the Minister failed to explain the type of road construction the grader will be doing on the road considering that they are demanding proper rehabilitation and construction of four collapsed bridges on the road in a petition signed by 32 Dademantseme (sub-chiefs) in the farming Communities in the area and copied to the Minister, Kono of Manya Krobo, the Lower Manya Krobo Municipal Assembly, Police, Electoral Commission.

In the Petition, the Chiefs threatened that it will not allow any political activity including campaigning and voting on their lands if their roads are not fixed.

The Deputy Minister who is also the Parliamentary candidate for the ruling NPP in Lower Manya Krobo Constituency was caught off guard on phone insulting the chiefs for stopping the grading of the road.

The Chief of Oborpa Dademankye Tetteh Ogbertey narrated that “So I had a call from one of our community residents which at the background some people were talking on top of their voices. So all that I heard was the voice of the Deputy Regional Minister insulting we the Chiefs that we are uneducated, that he is the Deputy Minister in the entire Eastern Region that nobody can stop him. That we the Chiefs are stupid to stop the grader from working and that he will take the machine away to a different Community.”

This angered the Chiefs who threatened to deal with the Deputy Regional Minister and ruling New Patriotic Party if he fails to apologize to them.

The Chiefs leniently fined the Deputy Regional Minister for his misconduct.

“But for the MCE for Lower Manya who shocked us by Kneeling before us to apologize we had decided to deal with the Deputy Regional Minister but the MCE who is the representative of the President knelt before us which has calmed us down so we were lenient and fined the Deputy Minister just a schnapp and some token which they are yet to pay. But we have warned that we don’t want to hear the Deputy Regional Minister on radio talking ill about the Community else we will deal with him.”

The road links about 50 farming Communities along the stretch but has deteriorated and become unmotorable as bridges on the road have collapsed making it difficult for farmers to transport their farm produce to market centers .

Chiefs and Residents in the Area have resolved not to allow political parties to campaign in the area if the roads are not fixed banning Political posters and erection of political billboards in the interim threatening to boycott the December 7 Presidential and Parliamentary Elections.