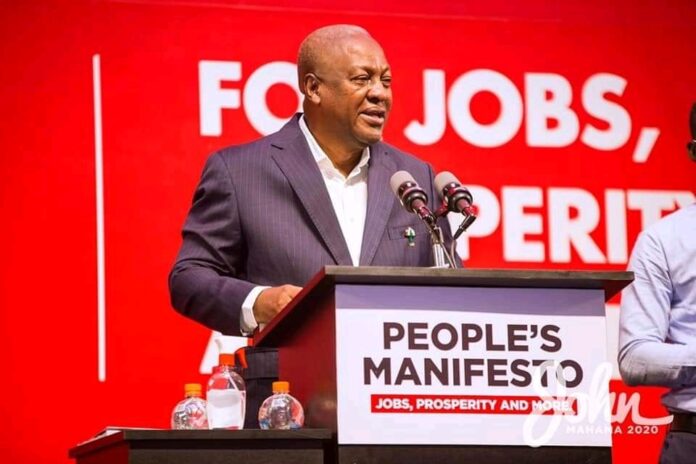 Claim: The John Mahama administration managed the 2016 budget with zero borrowing from the Central Bank.

The flagbearer of the NDC John Mahama at the launch of the party’s 2020 manifesto delivered a speech justifying his reelection bid with his track record of economic performance. The former president then claimed that his administration managed the 2016 budget with zero borrowing from the Central Bank.

So is this claim factual?

So Starr Fact Checker analysed this claim on three grounds.

In mid-2013, the government’s efforts to achieve fiscal consolidation were undermined by policy slippages, external shocks and rising interest cost. This continued until mid-2014. But then the country’s net international reserves position had weakened further. And the exchange rate had depreciated sharply, fuelling inflationary pressures.

Ghana entered an IMF-backed stabilization program, its 16th since independence, after missing fiscal targets in 2013 and 2014.

On 3 April 2015, the IMF approved a three-year Extended Credit Facility arrangement with Ghana. This was aimed at the restoration of debt sustainability and macroeconomic stability to foster a return to high growth and job creation while protecting social spending. The programme was extended for an additional year, ending on 2 April 2019.

(1) The Bank may (a) make advances and loans to the Government on overdraft or in any other form that the Board may determine;(b) make direct purchase from the Government of treasury bills or securities representing obligations of the Government.(2) The total loans, advances, purchases of treasury bills and securities made under subsection (1) shall not at any time exceed five percent of the total revenue of the previous fiscal year.[As substituted by the Bank of Ghana (Amendment) Act, 2016 (Act 918) s.16(a)]

The law did not state that there should be zero borrowing from the Central bank.

However the amendment bill’s passage was a key demand by the IMF under its extended credit facility (ECF) with the government. Specifically, the IMF had asked for the BoG’s functional autonomy to be strengthened in the new law and a prohibition of lending to the government by the central bank. Before the amendment, the Bank of Ghana was permitted to finance the government with the amount plus other domestic public borrowing capped at 10% of annual tax revenue. But this ceiling has often been breached, and monetary financing of Ghana’s double-digit deficits in 2012‑14 was particularly large.

The amendment reduced the public borrowing cap from 10 to 5 percent and not the proposed zero borrowing proposed by the International Monetary Fund.

With the law and what it says relative to borrowing, lets now proceed to check if zero borrowing from central bank happened in 2016 or not.

To verify this we checked the 2016 Annual Debt Management Report for the year 2016 as was submitted to parliament in fulfillment of requirements of Section 72 of the Public Financial Management Act 2016 (Act 921).

Section 2.2, which covers government borrowing and financing operations, shows that the John Mahama administration net borrowed 11.2 billion cedis on the domestic market to help manage the budget deficit. Out of that amount, government net borrowed 2.39 billion cedis from the Bank of Ghana. The figure in this report was captured as the provisional figure for end year 2016, which means an estimated figure.

It is also worth noting that government sought to net borrow 1.4 billion cedis from the central bank in the 2016 fiscal year.

Now its worth noting that the Bank of Ghana law amendment was passed by parliament in August 2016 which was close to the end of the year and if the law was to take full effect it could not cover January to July of 2016.

But the amended law even allows for government central bank borrowing of up to 5 percent value equivalent of the previous year’s revenue figures, which will be 2015. In 2015 the total revenues and grants was 32 billion cedis. 10 percent of that will be 3.2 billion. 5 percent will be 1.6 billion.

From the above, the claim by former President Mahama that government did zero borrowing from the Central bank is false.