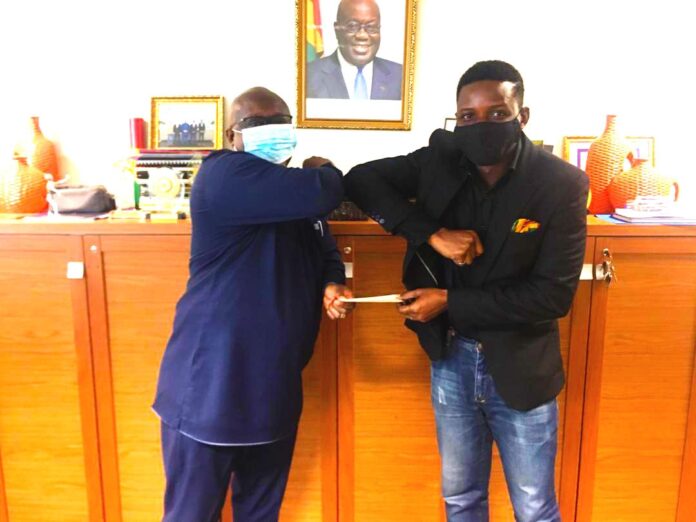 Deputy Minister for communication and Member of Parliament for Awuku-Senya West, George Andah has made a cash donation to Senya Sharks Beach Soccer club, a beach soccer club based in the Awutu-Senya West Constituency in the Central Region.
The beach soccer club was founded ten years ago as the first beach soccer club to be formed in the Central Region took part in the maiden edition of the Ghana Beach Soccer Association league.
Speaking at the presentation, the deputy minister for communications said his donation was necessitated by the fact that the beach soccer club belongs to the community Senya-Breku where he was born and raised hence the need to support them.
George Andah stated that his major priority is to empower the youth in the Constituency through education and sports hence the gesture to the club as they prepare for the upcoming beach soccer league season.
The Awutu-Senya West Constituency has a lot of talented footballers for this reason the MP, Nenyi George Andah intends to build an ultra-modern astro turf at Bawjiase to help unearth talents in and around the communities in that area.
On his part, the president of Senya Sharks Beach Soccer club, Fiifi Whyte Davies on behalf of the Board, management and players of the club thanked the Member of Parliament and said the gesture has come at the right time since it would boast the moral of the team ahead of the start of the upcoming beach soccer season and urged others who hail from the Awutu-Senya Constituency to emulate what the MP has done.
Senya Sharks Beach Soccer club is a beach soccer club founded on January 15, 2010 in Senya Breku of the Awutu-Senya West Constituency in the Central Region. They placed 6th at the maiden edition of the Ghana Beach Soccer Association league Season.