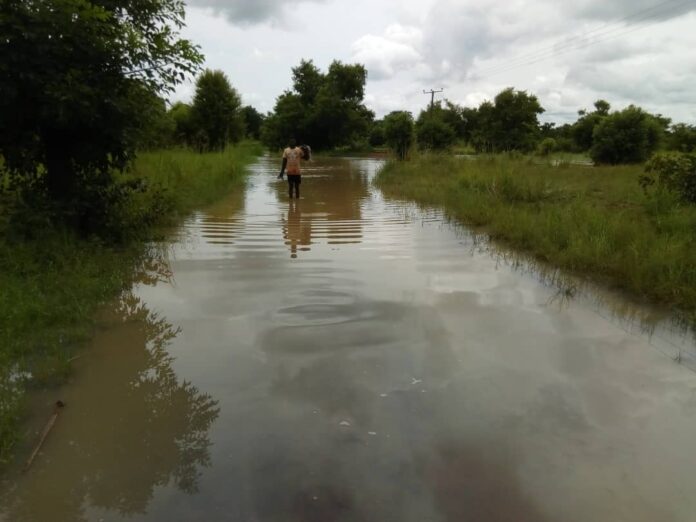 Residents at Nyimbale, a farming community in the Nadowli-Kaleo District of the Upper West Region have been cut off from the rest of the communities in the area.

This is due to the heavy downpour in the region over the last two months. The only route linking Nyimbale to the remaining communities is inundated with water.

Speaking to Starr news Upper-West regional correspondent Morris Banaamwine, residents of the area said it has been an annual ritual for decades now.

According to them, several appeals made to authorities to construct a bridge over the river that connects the community to other places have yielded no results.

Moving from Nyimbale to other nearby communities has been halted due to the intensity of the rains with its attendant inconveniences.

The residents cannot access social amenities such as health care, education and market at the nearby communities, where they are located.

A community health nurse at Nyimbale-Kora CHPS compound Miss Kunkuni Ashika who shared her sentiment with Starr News said the lack of a bridge coupled with lack of refrigerator to store drugs and vaccines in the community puts health workers in a state of fear when entering the water to provide healthcare to community members and called on government to expedite action to get the bridge connecting the community to other areas fixed to alleviate the plight of residents.

“As you can see, this water is our main problem at Nyimbale. It is a life threatening thing, if you are not fortunate this water can take you away but we have to pass through the water to pick our vaccines to vaccinate the children.
And we dont also have vaccine fridge so that we can pick more quantity to come and store so even if we have one child we have to cross the water to go to the sub-center to bring the vaccine.
So we pray and hope that one day government will come to our aid to construct a bridge for us so that we can run our services safely and freely”. Miss Ashika lamented.

She expressed worry over the hassle pregnant women go through during labour because of the poor nature of the road.

Many nurses and teachers have refused posting to the community and those who accepted have taken transfer to different communities and districts.

This has led to poor performance in Basic Education Certificate Examination (BECE) in the Area and low patronage at the health facility.

Lambert Adamu who is a resident of the community noted that anytime teachers and health workers are posted to the community to work they are compelled to seek for transfer to other areas as a result of lack of bridge connecting the community to other areas. This he said has led to poor performance of students in the area and difficulties in accessing quality healthcare delivery.

He questioned authorities of the Nadowli Kaleo district whether residents in the community were not Ghanaians and described the silence of authorities to their plight as unfortunate.

“This River at this period is very dangerous, if you are a stranger and you dont know exactly where to pass is risky, because inside the water there are stones we kept for easy crossing but because the water has submerged the place you will hurt yourself.

You cannot even cross at this moment at all unless the water subside.
Teachers that are being posted to the area always seek for transfers because of the nature of the road.

Parents will have to cross their children to school and do same after closing from school. All the social amenities such as CHPS
Compound, school, and market are at the Nyimbale-Paala and one had no option than to go there.

Since time immemorial this river has been there and we appeal several times but nothing has been done”. Mr Adamu stated.

The Assembly Member of the Area, Joseph Bargah said he has written to the Nadowli-Kaleo District Assembly for support but yet to receive a response. He appealed to authorities to speed up the processes to get the bridge constructed.