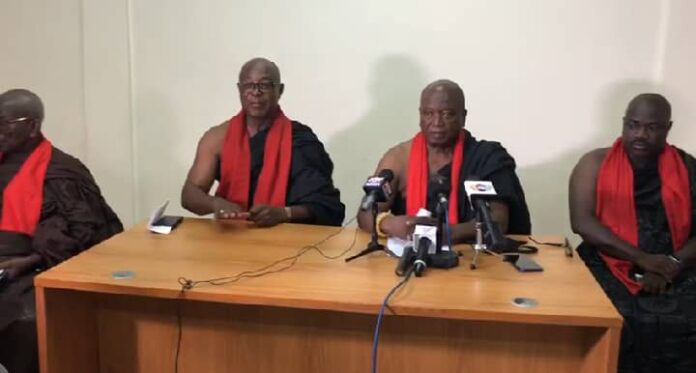 Chiefs of the Asogli State Council in Ho have cautioned members of the Western Togoland separatist group to desist from engaging in violence and channel their grievances through the appropriate means.

The call follows another attack allegedly undertaken by the group on Tuesday, where two vehicles belonging to the State Transport Corporation (STC) in Ho were set ablaze, while a driver in the yard was also assaulted.

The attack which was launched around 2:30 am marks second heightened violence and the destroying of state properties in the spate of a week.

But addressing the media in the evening of Tuesday in Ho, Togbe Adzilakle Howusu XIV, the Warlord of the Asogli State, speaking on behalf of the Agbogbomefia Togbe Afede XIV and the chiefs of the Asogli State, condemned the group’s actions while calling on government to ensure that the perpetrators of the crime are brought to book.

He said, “We condemn the act purported to have taken place in this region by the Western Togoland in no uncertain terms; the roadblocks, the burning of lorry tyres in various parts of the Volta region, the attack on the police stations at Mepe and other places, the seizure of police vehicles and burning of the STC vehicles in Ho. These were criminal acts which we urge the government to conduct investigations and those involved be made to face the full rigours of the law.”

The Council also warned that it may be forced to deploy its local troops to defend and protect its territories if such actions continue to fester.

“We, therefore, want to state clearly the commitment of Agbogbomefia Togbe Afede XIV and the Asogli State Council for peaceful and united Ghana and our preparedness to collaborate with government to ensure peace and stability in the Volta region and the country at large.”

The agitations of the separatists group is in demand for the independence of the Volta region and all other parts of the country being referred to as the Western Togoland prior to the 1956 plebiscite.

It is now emerging that there are about nine splinter groups leading the campaign which includes Papavi Hogbedetor’s Homeland Study Group and the Western Togoland Restoration Front which claimed responsibility for Friday’s violence that has since led to the killing of about three persons while several other people are left injured.