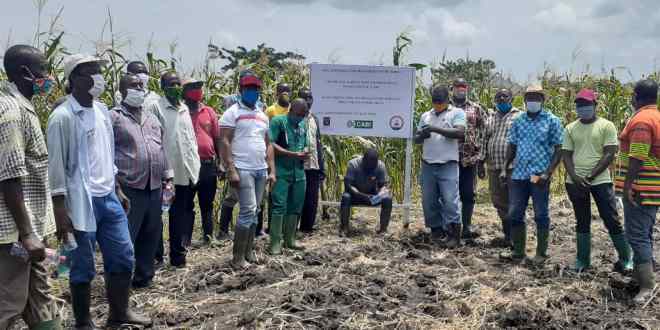 As part of efforts to sustainably manage the Fall Army Worm (FAW) in Ghana, the Centre for Agriculture and Bioscience International (CABI) and the Ministry of Food and Agriculture’s (MoFA) Plant Protection Regulatory Services Directorate (PPRSD) in collaboration with the University of Ghana Soil and Irrigation Research Centre (SIREC) at Kpong have begun exploring biological control options for safe and sustainable management of Fall Armyworm (FAW) in the country.

The collaborative research effort which started in 2017, involves the identification of naturally occurring parasitic wasps that attack the fall armyworm, rearing them in the lab and releasing them in maize fields.

It is more focused on the use of the parasitic wasp, Telenomus Remus which lays its eggs in fall armyworm eggs thus reducing the number of fall armyworm larvae that eventually emerge to feed on maize crops.

The MoFA declared Fall Armyworm an endemic pest in Ghana. This pest that originated from the Americas will continue to pose serious threat to food security and livelihood of thousands of smallholder maize farmers if not controlled.

To this end, the Ministry has advised farmers to monitor their fields frequently just after seed emergence for early detection of signs and symptoms of FAW infestation and implement the necessary management options at the vulnerable stages of the larvae.

As part of efforts to sustainably manage the Fall Armyworm in Ghana, CABI and the MoFA’s directorate have begun exploring biological control options for the safe and sustainable management of FAW in the country.

The use of Telenomus Remus wasps, is currently undergoing field trials at the University of Ghana Soil and Irrigation Research Centre (SIREC) at Kpong to assess its level of efficacy in controlling FAW infestation in maize farms.

The Project Manager of Invasive Species Management at CABI, Dr Lakpo Koku Agboyi, said the FAW situation is getting worse and most farmers were using different kinds of insecticides.

He said while the government is trying to promote the use of less hazardous insecticides (known as biorationals), some farmers were still sticking to the use of highly hazardous synthetic insecticides, which affect the environment, human health and also destroy natural enemies of pests.

The field visit was organized for selected technical experts, MoFA Directors and other relevant stakeholders to see first-hand the progress being made in this important research initiative and to assess the effectiveness of using identified natural enemies of FAW.

Under the study that started in 2017, the researchers identify from the wild, study, rear and release natural enemies, which can attack the pest across the country.

Though some maize farms were sprayed with chemicals other adjoining maize farms that were not sprayed did equally well because they were being protected by the released parasitic wasps.

He advised farmers to avoid the excessive use of chemicals to control the FAW because of the negative impact chemicals have on human health and the environment.

Regarding the frequency of application, he advised farmers to analyze the level of infestation on their farm before applying the insecticides.

Dr Victor Attuquaye Clottey, the West Africa Regional Representative of CABI, said the initiative is the first step in developing an integrated pest management approach where pesticides are used in conjunction with good farm practices and other means of controlling the insect to a level where its negative economic impact will not be felt.

Mr Godswill Glante, the Lower Manya District Agriculture Director, admitted that it was a good collaborative effort among the various institutions that are carrying out the research, thus the University of Ghana, PPRSD and CABI.

A senior researcher and an Agricultural Entomologist at the Soil and Irrigation Research Centre, Dr. Ken Okwae Fening said the fight against the fall armyworm should be a collaborative effort and a national concern.

Some farmers shared their views on the project that seek to help them sustain their farming.

The ongoing effort for sustainable management of fall armyworm should continue with a strong support from the Government of Ghana and its technical and financial partners at national and international level to safeguard farmers’ welfare and food security in the country.