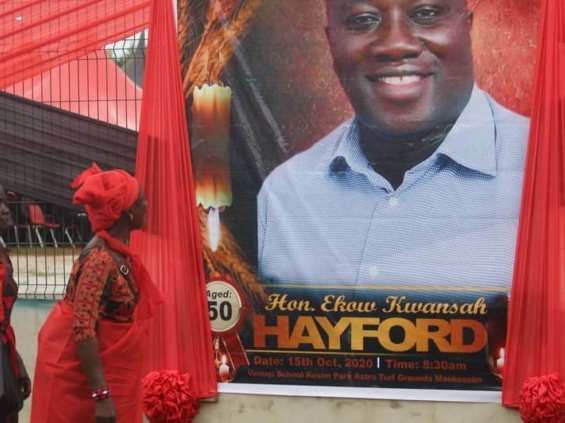 Shocked and saddened by the cruel murder by armed robbers of the young MP from Mfantseman, and united in grief and mourning, Ghanaians have condemned the dastardly act in unison, at the same time lamented and still lamenting why, why, why?! This lament had hardly left our lips when a brazen armed robbery took place in the Garden city, at, of all places, the central market. A few days after that, another one at a bank in Lashibi, s suburb of the capital. Though not exactly under siege, the country is justifiably feeling that way: under siege!

It seems the country has been engaging in a death wish for some time now which is expected to be election-related. Violence is constantly intruding into our consciousness and many are not expecting this year’s elections to end without some violence.

To the why, why, why, we need not stray far from the MP’s murder scene for an answer. According to an eye witness, one of the murderous young men was livid with rage when he discovered the identity of one of his would-be victims as an MP. He raged with anger against politicians for bringing Ghana to a sorry pass. The poor MP was doomed, as it were, with that judgement…

Let me make this clear: I am not suggesting that violent crime can be found only in Ghana. Not at all. In fact, compared to other countries across the globe regarding violent crime, Ghana is certainly a haven of peace and security.

My main worry: Could our politics be so toxic, distrustful and disliked as to end up in assassination at the hands of an armed robber? Somewhere in 2018 or thereabouts, I attended a diplomatic think-tank meeting where one of the contributors was a very senior level retired military general. He had expressed great worry that Ghana was gradually accumulating an army without uniforms, an army without insignia and crucially, an army under no command structure.

He was referring to the battalions of unemployed youths roaming about, with no inspiration but elevated senses of envy and rage at what they regard as opulent lifestyles of some politicians, some public servants and indeed even some business people. He warned that if the political class especially, did not bring hope to this horde of envious and angry young people, Ghana may yet go through very trying social breakdown moments before long. He also warned that politicians must strive to ensure that Election 2020 would not end in major disputes that could then find “work” for these battalions.

Though, those who murdered the MP did it as a robbery, it was also a political statement…They are the battalions expected to heed to the battle cry of “All Die Be Die”. It was at first, the random violent acts of “invincible” or “invisible” forces, culminating in the Ayawaso West Wuogon terrorist attacks that gave the hints, but from what the armed robbers said before killing the MP, we are now facing a clear and present danger! These current attacks are well planned and executed. Where have they learned their MOs from? Sadly, as NPP presidential candidate for election 2016, Nana Addo Danquah Akufo-Addo said he saw nothing wrong with bringing mercenaries into Ghana to train his security detail (See fact check below).

From the findings of the Emile Short Commission, it was clear that the governing party/government/state institutions, were implicated in the violence of AWW. It is therefore not enough for Mr. Akufo-Addo to threaten that his government would deal with people who would foment trouble during the elections. Ghana needs confidence building words, not threats of showing where power lies. And he forgets himself: he is the one who clearly and unequivocally made electoral violence a central plank of his general political doctrine with “All Die Be Die”.

He did not waste time after election 2016 and sowed the seeds of contentious elections when he sacked Madam Charlotte Osei (who had supervised the free, fair, violence-free elections that took him to the executive office) as the Election Commission chair and brought in Madam Jean Mensa as replacement. She also wasted no time in carrying out his agenda by stacking all the odds in his favour, to the detriment of other political interests. With this kind of disposition, the resentment has been building up. In fact, the atmosphere has been so dangerously polarised that the murderer’s words can be taken as a warning of what may be in store for our country. The country needs, no, demands, a disclaimer, a disavowal of this “All Die Be Die” political doctrine for all of us to buy into. For as long as it stands, some defence mechanisms would also lurk in the shadows.

The responsibility must be shared by us all but:

*The religious leaders – not quite the bona fide arbiters expected of them. Oh yes, a few have dared speak out.

*The traditional rulers – not trusted as honest brokers but the principled stance of the National House of Chief on the so called New Voter Register has been noted.

*The judiciary – not trusted at all and discredited in many minds.

*My own fraternity, the media – highly partisan/polarized – some even allege corruption.

*The intellectuals/academics – keeping to themselves, not wanting to get into trouble.

*The security agencies – considered compromised and like the judiciary, not in a position to provide neutral defence and peacekeeping.

*The Peace Council – seems to have lost its voice after Election 2016.

*The general citizenry – loss of confidence in the entire system and,

*The Council of State – no independence of thought and action, almost like another wing of the governing party.

We are all polarized; instead of defending and upholding the freedoms of expression, choice and association in as fair a manner as expected by the constitution, we are rather consumed by the hatred engendered by “All Die Be Die”. No political party would give way…

Other acts of violent crime have preceded this one, but this is the first time that an armed robber has linked his crime to hatred for politicians…

They are waiting to visit their anger on society in general, should these elections go awry. Someone once referred to himself as the “product of the anger of the people”! The killers of the Mfantseman MP fall in that bracket. No glossing over that one. Time enough for sober reflection to avert catastrophe.

“Leader of the opposition New Patriotic Party, Nana Addo Dankwa Akufo-Addo says he sees nothing wrong with bringing mercenaries into the country to train his security detail…Ghanaians woke up to the frightening news about a group of mercenaries brought into the country to train young men in various military drills, including unarmed combat, weapon handling, VIP protection techniques and rapid response maneuvers.” Ghanaweb Tuesday 22 May 2016.

By Amb. Alhaji Abdul-Rahman Harruna Attah – Opinions published on this website do not represent the views of EIB Network or Starr FM.