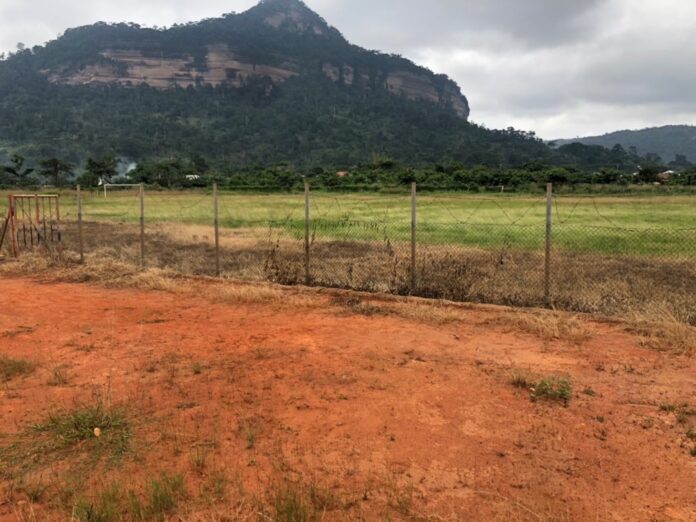 Work will soon commence on the Nkawkaw sports stadium in the Kwahu West Municipal Assembly of the Eastern Region, Agoo News has gathered.

The Nkawkaw Sports Stadium became the most topical issue in the country when the Deputy CEO for the Middle Belt Development Authority Joyce Opoku Boateng announced her intention to seek fund from her office to fix it.

In November 2019, starrfm.com.gh in a publication revealed a manifesto promise to develop the park by the then aspirant of the Nkawkaw Constituency Madam Joyce Opoku Boateng during the ruling New Patriotic Party’s Primaries.

According to her, sports is a vehicle for development and for that matter will ensure the Nkawkaw sports stadium is transformed into a super modern sports complex.

The stadium which holds 5,000 people is in a poor state although it’s one of the largest parks in the Eastern Region also the home to Okwahu United Football club.

The stadium is used mostly for football matches and many other sporting events including inter-school competition in Kwahu and its surrounding communities.

The Nkawkaw sports stadium also serves as a destination during the Kwahu Easter Paragliding festival where pilots alit. Sports fans have on several occasions expressed worry over the current state of the stadium, despite several appeals to ensure the park is fixed; no improvement has yet been recorded.

In September this year, the Minister of Youth and Sports, Isaac Kwame Asiamah cut  sod for the reconstruction of the Nkawkaw Sports Stadium located in the Eastern Region.

At the sod-cutting ceremony for the edifice which is to be constructed at Ata Ne Ata, a community located in the picturesque shadows of the Odweanoma mountain at Nkawkaw, Mr Asiamah said it will be reconstructed into a stadium complex after over 25 years of neglect.

Mr Asiamah disclosed that upon completion, the facility which is being funded by the Middle Belt Development Authority would be used to host international sports competitions including football matches of the Black Stars.

He also urged all residents of Nkawkaw to guard the project jealously by preventing nation-wreckers from stealing building equipment and encroaching on the site.

In his address, the CEO of the Middle Belt Development Authority, Mr Joe Danquah said the facility would be constructed by Farhadel Company Limited at a total cost of GH₵27million.

Urging the residents of the area to vote massively for President Akufo-Addo if they want the project to be completed, he said the first phase which includes the reconstruction of the football stadium would cost GH₵14million while the second phase would cost GH₵13million.

In other words, some people have raised concerns over delay by the contractor to begin work after the sod cutting ceremony was held which saw the presence of Kwahu Gyaasehene and Atibie Chief Barimah Kwame Asante Betiani II who represented Kwahuhene Daasebre Akuamoah Agyapong II

At the site today, a consultant of Skol Company Ltd Mr Arnold Odei who together with the Eastern Regional Director of Middle Belt Development Authority Mr Arimeyaw Alhassan Alolo and other officials in a short survey reveal the next action on the project.

Addressing the media today, Mr Arnold Odei said work will begin on Monday adding the contractor is on a mobilization stage. Currently, the contractor is on a mobilization stage meaning he is making the necessary preparation so as you can see, he has stated the demolishing exercise, transporting all the materials to site, all equipment will soon be moved here after fixing structure for the workers.

Meanwhile, The Minister of Youth and Sports, Mr Isaac Kwame Asiamah, has attributed the delay in the reconstruction of the Nkawkaw Sports Stadium to the redesigning of the multi-purpose edifice.

Initially, the stadium was carved out to accommodate only 5,000 fans, but upon further consultations, we decided to increase the capacity to 8,000 – hence the delay,” he told the Times Sports on Tuesday.

He said the stadium design had to be reviewed as well to have a place for more sport disciplines, aside football.

According to the Sports Minister, the challenges have been dealt with and workers are now back on-site “to start the ball rolling. As we speak now, the coast is clear and work has begun this week.”

The Nkawkaw stadium, which is being funded by the Middle Belt Development Authority (MBDA), will have a FIFA-standard football pitch, a multi-purpose court for more than 16 sport disciplines, an IAAF standard track, hostels and a restaurant.